BNS
aA
Ramūnas Karbauskis, leader of the ruling Lithuanian Farmers and Greens Union, says the Electoral Action of Poles in Lithuania – Christian Families Alliance might get the position of a deputy speaker of the Seimas, despite not being part of the ruling majority. 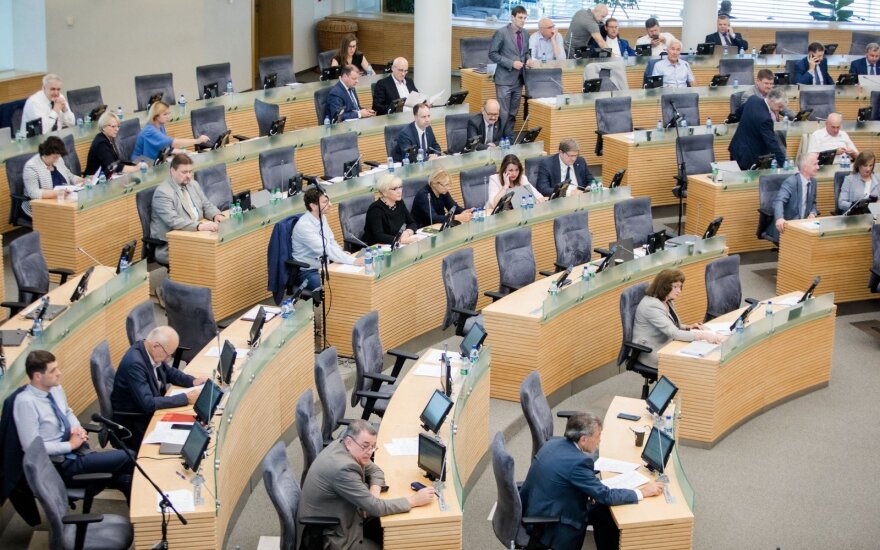 In the Seimas
© DELFI / Karolina Pansevič

In his words, lawmakers should change the Statute of the Seimas and increase the number of deputy speakers from five back to seven.

"If the Seimas makes this decision, and I think it will, by making seven deputy speaker positions again, so they will offer one to EAPL-CFA, (…) irrespective of the existence of any agreement or not," Karbauskis told BNS Lithuania on Tuesday.

"It would allow involving them into the Seimas management. Besides, they have never needed any agreement for them to vote together with us based on values," he said.

The number of deputy speakers was reduced at the beginning of this parliament at the LFGU initiative, citing the need to cut costs.

According to Karbauskis, the second of the two additional deputy speaker positions would be filled by a representative of the Order and Justice party. The latter and LFGU are currently mulling signing a cooperation agreement between the parties' political groups in the Seimas, with the negotiations set to be finished later this month.

Meanwhile, any cooperation with EAPL-CFA will not come in the form of any signed agreement. EAPL-CFA had offered LFGU to sign a coalition agreement but the latter does not to give any positions in the government.

And an agreement between the political groups will not be signed as EAPL-CFA does not want that, Karbauskis said.

The opposition Homeland Union – Lithuanian Christian Democrats remain the most popular party in...

Lithuania's Parliamentary Speaker Viktoras Pranckietis does not rule out that the ruling Lithuanian...

Karbauskis suspects that Grybauskaitė had a plan to replace him: "I know how it was being done"

Secret plan to draw in Poles not created by "Farmers": only one key detail changed

The signing of a cooperation agreement between the Order and Justice political group in the Seimas...