Vaidotas Beniušis,
BNS
aA
Lithuania's Chief of Defense Lieutenant General Valdemaras Rupsys says NATO's multinational battalion that was deployed to Lithuania three years ago is a significant factor of deterrence against Russia and has significantly increased in quality. 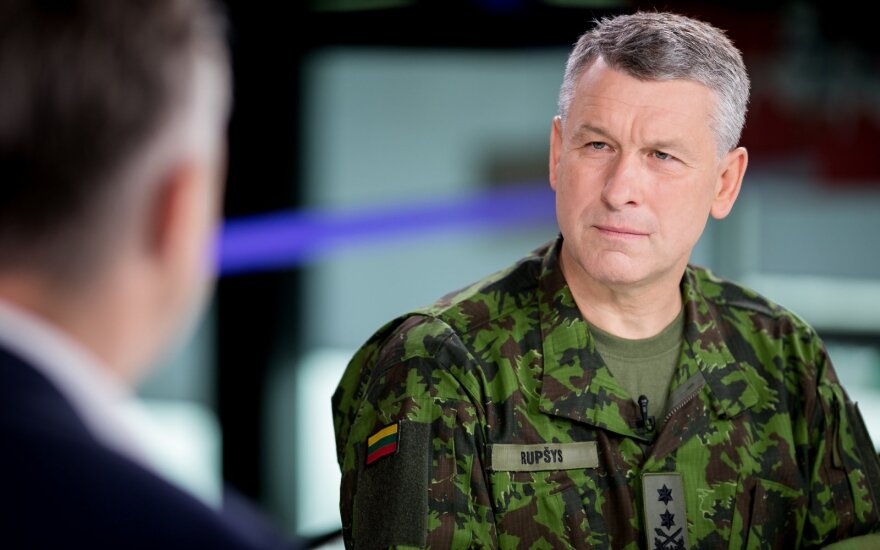 The general told BNS in an interview that he has no doubt that despite existing legal restrictions, the German-led unit would be ready to act in the event of a crisis or conflict.

"I think there would be enough determination and will to use it. This is guaranteed by their military commanders and not even called into question," he said.

According to Rupsys, the geographical proximity to Russia poses additional challenges to troops, but counterintelligence agencies in Lithuania and its allies have been actively working to ward off possible provocations.

In the general's words, Germany's investment in Lithuania's military infrastructure shows that they are committed to staying in the country for a long time.

He also told BNS in the interview that talks on NATO's updated defense plan for the Baltic states and Poland are still ongoing within the Alliance as some political issues remain to be solved.

– How has the deployment of NATO's battalion changed the security situation in Lithuania?

– Strategically, NATO has demonstrated unity and showed it has the means and the will to take concrete steps to deter a potential adversary.

From the operational-tactical point of view, the deployment of enhanced Forward Presence (eFP) to the Baltic states is also of great value. It provides serious combat power that complements Lithuania's capabilities, and a potential adversary has to take this into account.

– How have the capabilities changed over the three years and what are the expectations for the future?

– Germany took on its role of our battalion's framework nation with enthusiasm, although the infrastructure and training base were not fully prepared to receive the troops.

The living and training conditions and interaction with our military units have greatly improved. For us, this is a unique opportunity to learn how to command and work with a mechanized heavy unit.

– Lithuania’s top officials have asked NATO allies to deploy air defenses to protect the multinational battalion. How is the battalion's equipment changing and what is being sought for the future?

– This is a mechanized battle group. This means it has armored combat vehicles, tanks, indirect fire weapons, that is, howitzers, and engineering and tactical reconnaissance equipment. If necessary, they can deploy engineering, and mine laying and clearance equipment to Lithuania at any time. Moreover, the German land force command sends in additional capabilities at our request if Lithuanian military units need this during exercises.

Air defense plans and the vision are a broader issue in the NATO context. We do raise this issue. A unit of this level is provided with short-range air defense support, and we are purchasing the NASAMS system to ensure medium-range air-defense. Higher-level air defense is a separate issue. But if there is a need for the battalion’s combat training, exercises and plans, airborne support is provided, too.

– Questions are sometimes raised about Germany's strict rules of engagement (ROE). What would you say to those in doubt? Could German soldiers fire in a crisis or conflict?

– Yes, the national level has some influence on ROE. The framework nations of the battalions in Estonia, Latvia, Lithuania and Poland have slightly different ROEs.

However, what is most important is that the strategic goal has been achieved: NATO has demonstrated both to our societies and to the potential aggressor that it is operational and capable.

As to the tactical operational level, if there was a need to use the capabilities in combat action, they would certainly be used for their intended purpose. I believe our eFP would have the determination and will to use it. This is guaranteed by their military commanders and not even called into question.

In low-intensity operations, ROE details can be closely followed and compliance can be checked. The purpose of our eFP is deterrence and, if necessary, defense. If Lithuania, as a NATO member state, were to be defended, that would not be a low-intensity operation. All units would operate under the commander's intent and decisions. They have weaponry, personnel, equipment, and enough ammunition for the battlegroup to fight.

– Do Russian services stage provocations against the battalion’s troops?

– Cases of information attacks have been recorded. We do not specifically say that Russia was behind them, but assumptions can be made

Our counterintelligence agencies and those of the states contributing to the battalion are actively working. We are watching and are ready to prevent any such actions.

– Compared with other places of deployment, are the battalion's troops subject to stricter requirements on the use of communications equipment and communication with people around them because of the proximity to Russia?

– Yes, they are. The units are given instructions on how to behave. They are in a foreign country and, at the same time, a NATO buffer state. Each state has its own instructions on how to behave. Initially, there were very strict rules, such as those the Dutch had, on using mobile phones and leaving the base. These rules are somewhat milder now; the troops have adapted to our conditions.

On weekends and holidays, soldiers can leave the base, visit attractions in organized groups and individually, or spend their leisure time in cafes, cinemas and sporting events. In my opinion, they have no particular challenges when it comes to spending their free time. Of course, each place has its specificities, and the troops initially had to adapt to life in Jonava and cultural differences. We do remember that there were problems after the deployment of the first air-policing mission in Siauliai, too.

Everyone has adapted now. Experiences have been exchanged formally and informally. I see no major problems.

– How long will the battalion stay in Lithuania? Will it change?

– It may increase or decrease in size, depending on military training tasks. Should the security situation change, nations have flexibility to send units, and we as the host nation are flexible in providing the conditions.

In the short term, there should be no significant increase. As to downsizing, definitely not, because our combat training schedules are intense.

How long they will be deployed here will depend on NATO’s political decision. Germany declares that they will stay here as long as necessary. To be blunt, it makes sense for them to be here, because training in Lithuania creates huge value-added.

Also, we can see that, to our knowledge, the German Defense Ministry spent over 62 million euros on the development of the battalion battle group infrastructure Lithuania in 2017-2018. The money was used to develop accommodation facilities for servicemen, premises for staff work, a temporary logistics support area, warehouses and well-being facilities for servicemen in Rukla, and to build a camp for 500 troops in Pabrade.

We have been informed that in the next couple of years, Germany will continue to allocate millions (of euros) for investments in Lithuania to improve and develop the military infrastructure. It is discussed that the funds could go toward large infrastructure facilities, such as warehouses, barracks, or a permanent logistical support area, or something like that.

– My final question is not directly related to the battalion. What is the current situation regarding the updating of the defense plan for the Baltic countries and Poland? There have been reports that the plans returned to the Military Committee for review after they were approved by the NATO summit in London.

– A number of task groups have been working on updating defense plans not only for the Baltic countries, but also on updating all NATO defense plans. The process of coordination with all member countries is ongoing, because these plans are interconnected, especially in terms of capabilities that NATO member states can generate.

Work is underway. The latter NATO committee assured (us) that decisions should be made soon. Despite the decision of the London summit, when it was said that issues had been agreed on, some polishing up by politicians is still needed.

The NATO enhanced Forward Presence Battalion Battle Group was deployed to Lithuania in February 2017 in response to Russia's aggression in Ukraine and its activity in the region. Similar units were deployed to Latvia, Estonia and Poland. Over the two years, more than 8,000 soldiers from nine NATO member states have trained together with Lithuanian troops on a rotational basis.

Lithuanian military intelligence says Russia continues to build up its military capabilities in the...

The Lithuanian Defense Ministry proposes to introduce the " official use " label for sensitive...

Baltrenas: we can help healthcare to develop medical intelligence (1)

Lithuania's military intelligence is ready to help the country's healthcare system to bolster its...