Catalonia and the principle of territorial integrity

(2)
Albert Royo i Mariné | Secretary General, The Public Diplomacy Council of Catalonia
aA
Catalonia cannot be compared with challenged and occupied areas in the Baltic states and Ukraine. 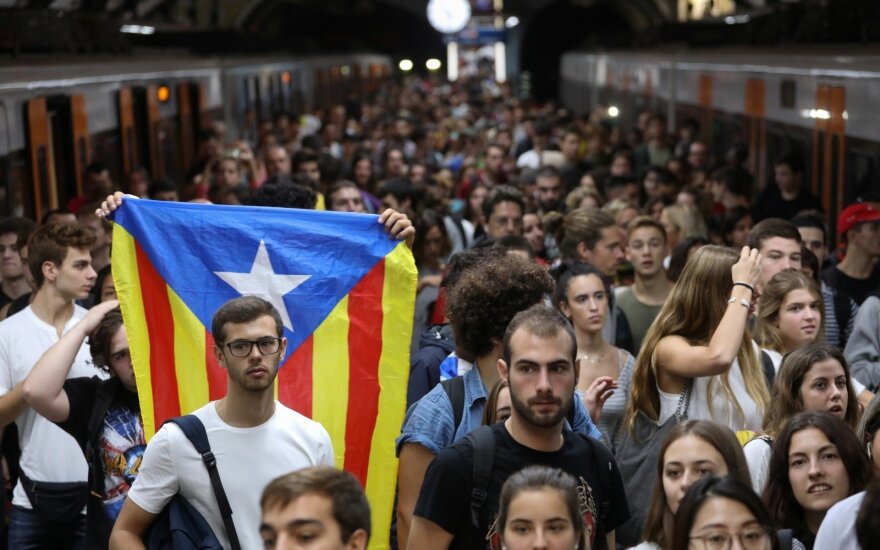 Over the last few days and hours, comparisons have been made in both media outlets and on social media profiles based in Nordic-Baltic region and Eastern Europe comparing Catalonia's self-determination process to challenged and occupied areas by third actors in the Baltic states and Ukraine.

The pro-Russian media and far-right European leaders often compare the case of Crimea and Catalonia on the grounds of the right to self-determination.

At the same time, photos of wall paintings have popped up in social media linking the rebel militias in Eastern Ukraine with the Catalan Independence flag (the estelada").

All this, logically, is causing concern not only among Ukrainians, but also in the Baltic States, as there have been reactions comparing the self-determination process in Catalonia and its possible outcome, to potential instability in challenged areas under threat in these countries.

At the Public Diplomacy Council of Catalonia (Diplocat), as a Catalan public-private partnership committed to explaining to foreign public opinion the Catalan self-determination referendum, we observe these comparisons with serious concern; this is why we want to make Catalonia's position clear.

Catalonia's demand for self-determination is based on the protection of our historical self-government and the improvement of the same, as most polls show. Catalonia is a historical European nation and we reiterate our right to be recognized as such.

The Catalan nation was born in the tenth century when Count Borrell II of Barcelona failed to swear fealty to Hugh Capet, the first Capetian monarch of the emerging French kingdom. Some centuries later,in 1359, a formal Government of Catalonia, , the Generalitat, was born. Our current President, Carles Puigdemont, is the 130th President of the Catalan Government.

Calls for independence were few until 2010, when Spain's Constitutional Court rewrote 14 articles of Catalonia's Statute of Autonomy and reinterpreted 27 others, mainly those relating to language, justice and fiscal policy. It also deleted the reference to Catalonia as a "nation". Since then support for independence has swung from 40% to 55% according to different polls, and calls for a proper self-determination referendum have swung from 70% to 80%.

Since 2012 different Catalan leaders have tried to reach an agreement with the Spanish government over approval to hold an agreed self-determination referendum, but the answer has always been a firm "no" on the theory that this would be unconstitutional, followed by recommendations to change the Spanish Constitution, which requires a 2 / 3 majority in the Spanish Parliament to do so. As Catalonia is a structural minority within Spain, it is almost impossible to do so, if not utterly impossible.

Nevertheless we have always invoked the right to self-determination in a peaceful manner.

The Principle of Territorial Integrity, as the International Court of Justice stated in its well-known ruling on the independence of Kosovo applies to relationships between states.

In addition, the, UN Independent Advisor on the Promotion of a Democratic & Equitable International Order, Mr. Alfred de Zayas, has stated that the principle of territorial integrity protects states from other states, but cannot prohibit the self-determination of peoples. Mr. de Zayas and other UN experts also called on Spain to respect human rights in view of recent events in Catalonia.

Should Catalonia, become independent we will be a committed and responsible actor within the international community. We defend that the principle of territorial integrity, as defined above, must be respected so to ensure a durable and safe international order.

Ukraine is a country that we admire for their self-determination in the past, and we fully support the independence and territorial integrity of Ukraine. On the basis of the principle of territorial integrity we condemn all hybrid actions taken by third parties on Ukrainian soil. Catalonia does not recognise the occupation and annexation of Crimea by Russia and we condemn any attempt by violent foreign-backed rebel militias in Crimea and Eastern Ukraine to compare Catalonia's self-determination process to the current events going on in there.

Ukraine is a country quite a distance from Catalonia, and expressions of solidarity between Catalonia and Ukraine are few and far between. But the Catalan people have always stood in solidarity with smaller nations against aggressive actions by larger ones, and we certainly criticise Russian interference in the sovereignty of smaller nations. Any picture taken in the streets of Barcelona with people holding flags of the Catalan independence movement and the occupied areas in Ukraine certainly only represent a misguided minority within our society.

Catalans supporting self-determination clearly see themselves reflected in the Baltic States struggle for independence. We certainly cannot compare what is happening in Catalonia with the Soviet Union's occupation of the Baltic States, but the spirit to reaffirm ourselves is there, and some Estonian flags were seen recently among protesters in the streets of Barcelona.

We stand in solidarity with the self-determination of the Finnish, Lithuanian, Latvian and Estonian nations between 1917 and 1918. We convey our best wishes to them for their 100th anniversary celebrations, already going on in Finland this year and being planned for next year in Lithuania, Latvia and Estonia.

We also condemn any attempt by foreign states to try to destabilize areas in Lithuania, Latvia and Estonia, where, unlike Catalonia today, demands for self-determination, are almost non-existent. Clearly anything that might happen there would be caused by military interference pushed by a third party, a clear violation of the principle of territorial integrity, and nothing to do with self-determination.

We also read with concern articles linking the Catalan independence movement with a campaign managed from a country outside the European Union with the ulterior aim of trying to destabilize Europe. In this sense, we must say that, whatever they do, Diplocat has never and does not collaborate, in any form, with foreign media outlets whose mission is to misinform international public opinion.

We appreciate and are grateful for public expressions of support for Catalonia's ongoing self-determination process that have come from Ukraine, Finland, Lithuania, Latvia and Estonia, from citizens who can clearly recognise that Catalonia has nothing to do with the above-mentioned movements and illegitimate tactics.

Spain is in crucial need of a dialogue with its citizens, Lithuania's Foreign Minister Linas...