...
BNS
aA
Lithuania must defend itself and will not back down from its decisions on migrants, the country's Interior Minister Agne Bilotaite says. 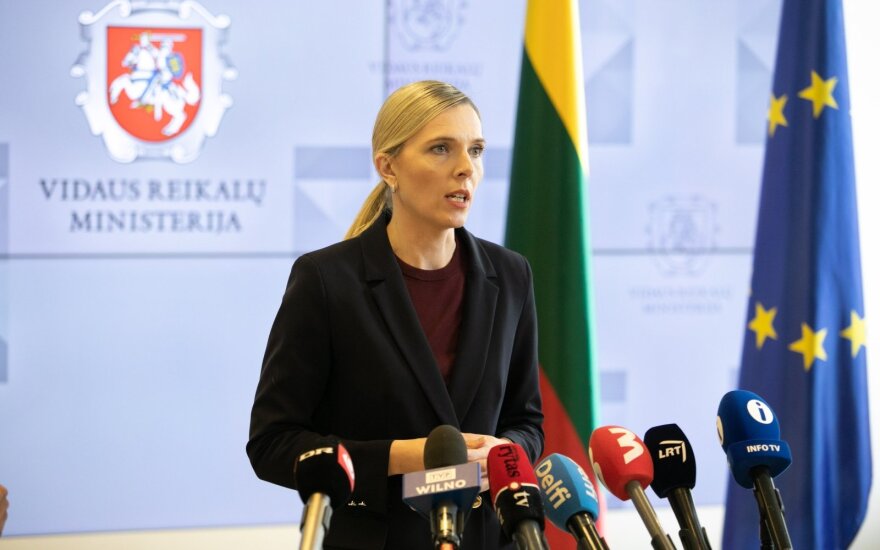 "Lithuania has taken all important decisions and measures to protect its national security and the European Union's external border, and right now we don't see the situation changing significantly to the point where we can back away from our decisions. Lithuania will certainly defend itself if such threats persist," she told a press conference on Friday.

Commenting on the European Court of Justice's recent ruling stating that Lithuanian law does not allow illegal migrants to apply for asylum and allows them to be detained simply for entering the country illegally, the interior minister said the possibility to ask for asylum does exist.

"Lithuania has a system in place that makes it possible to apply for asylum. It's not that we don’t make it possible. We make it possible, i.e. at the embassy, at certain border checkpoints. Unfortunately, we don’t see any examples of willingness to use that opportunity, for understandable reasons and the regime's involvement in the process," the minister said.

In her words, the decisions taken by Lithuania were necessary not only for the country's national security but also for the protection of EU's external border.

She also stated that Lithuania's actions had been coordinated with international institutions and the European Commission, adding that the current legal regulation on irregular migrants no longer matches the realities, therefore, Lithuania is seeking to change the rules.

"Up until now, Europe has not faced this kind of attack. Until now, the migration policy has been very different and the legal system has been adapted to it. The system has not been adapted to situations like the one Lithuania is facing, and that is why we are seeking change," Bilotaite said.

On Thursday, the EU Court of Justice of the European Union ruled that Lithuania's legal norms that do not allow illegal migrants to apply for asylum and allow them to be detained simply for entering the country illegally run counter to European directives.

Such a preliminary ruling was issued under a fast track procedure on Thursday by a judicial panel after it heard a request from the Lithuanian Supreme Administrative Court in the case of one migrant.

The Court ruled that both the detention of irregular migrants in times of war, a state of emergency or an extreme situation on the sole ground of being in the country illegally, as well as denying them the possibility to apply for asylum, run counter to EU directives.

Lithuania is planning to close the Foreigners' Registration Center in the border town of Medininkai in...

More than a hundred migrants attempted to cross the border from Belarus to Lithuania illegally on...