BNS
aA
Vytautas Bakas, former chairman of Lithuania's parliamentary Committee on National Security and Defense, who has information on alleged unlawful collection of information by the State Security Department, says he will seek an parliamentary investigation into the information provided by an intelligence officer. 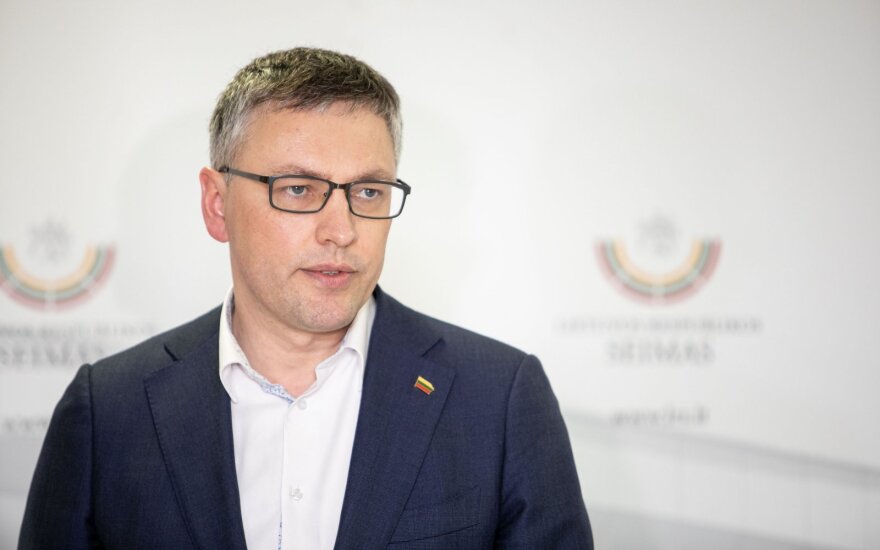 In his words, such a parliamentary investigation would need several months.

"I believe we can dedicate several months to have key questions answered. Later on, if impeachment proceedings took place and other issues were raised, with no doubt, it would take longer, but the investigation itself should not be complicated in terms of time," the lawmaker said.

Under the Statute of the Seimas, a parliamentary investigation can be initiated by the Board of the Seimas, committees, political groups or a group of at least 36 MPs.

Bakas said on Thursday the intelligence officer, who provided the information in question, turned to him as the then chairman of the CNSD, in April, 2019. The lawmaker says that on the same day he met with Zydrunas Bartkus, director of the Special Investigation Service. According to Bakas, during this meeting it was decided that law enforcement institutions should investigate the provided information.

Bakas said he later on inquired several times whether there was any news regarding that information.

"The process was in the hands of law enforcement institutions, and only in January this year when after one committee sitting I received information that the process was as if completed, I decided to officially turn to the Special Investigation Service and the Prosecutor General's Office and ask for the final answer on the adopted decision. I received the answers on Jan 29," Bakas said.

The politician said he has only answers of general nature from the law enforcement institutions and doesn’t know if his information was in fact checked and what was decided.

"I have trust in those facts provided (by the intelligence officer – BNS). That information includes specific names, specific actions, dates, people with identified actions and descriptions. (…) The questions on why it was done remain unanswered. I believe it’s important for the whole society to have then answered," Bakas said.

"I believe that this information is confirmed, it will lead to several officers losing their position. I would also not rule out impeachment proceedings against certain politicians, if it turns out that they asked intelligence to unlawfully collect information," he added.

BNS reported on Wednesday that a high-ranking intelligence officer last year informed Vytautas Bakas, the then chairman of the parliamentary Committee on National Security and Defense, that tasked by the SSD leadership, intelligence collected information in 2018-2019 about people in the then presidential candidate Gitanas Nauseda's circle as well as diplomat Vygaudas Usackas.

Information was collected about several dozen well-known people in Lithuania.

Having the status of a whistleblower, the officer believes intelligence chiefs with their actions could have violated the principles of lawfulness and political neutrality.

The SSD says it did not collect information about the people in question but could check information.

Darius Jauniskis, director of the SSDm said on Thursday "the SSD met with the circles of various contenders or candidates for various reasons". Jauniskis added that "candidates and their headquarters were targets of foreign intelligence services and the department worked with that information".

Jauniskis said he's ready to share information with the parliamentary Committee on National Security and Defense.

A presidential election took place in Lithuania last May.

A pre-trial investigation against Algirdas Paleckis , a Lithuanian politician suspected of spying for...

Extremists do not pose any special threat to Lithuania's national security, the chairman of the...