(5)
BNS
aA
The heavy equipment of the US battalion to be stationed in Lithuania for six months has arrived in the country on Monday. 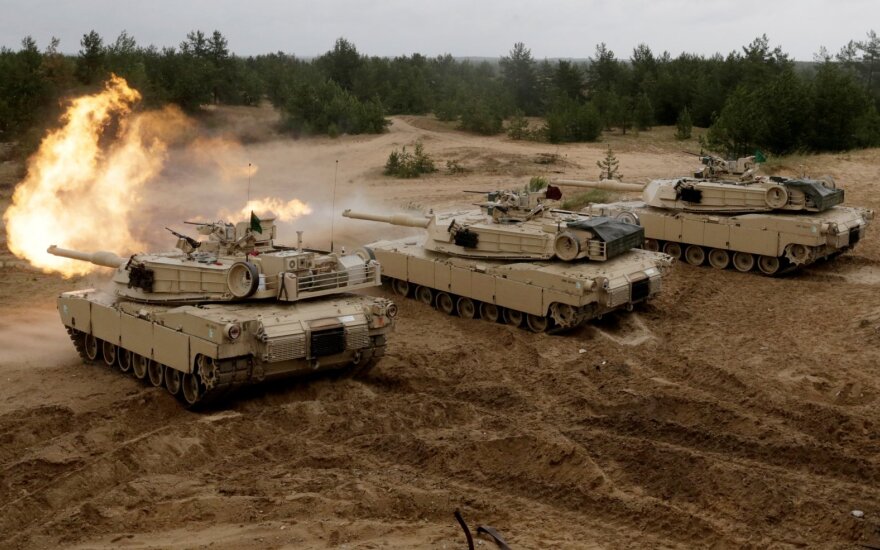 Another several dozen tanks are set to arrive over the upcoming weeks.

Lithuanian Minister of National Defense Raimundas Karoblis says the arrival of the US military unit shows the deployment of forces of that size is no longer a taboo.

"First of all, it sends a message to Lithuania and neighboring NATO countries that we are countries that have to be defended as part of NATO in case of a crisis, that allies are with us," the minister told BNS Lithuania on Monday.

"It also sends a certain message to Russia that the United States is involved. It’s an additional deterrence factor," Karoblis said.

Around 500 American land force troops will train in Lithuania until spring.

According to the minister, such an exercise will be important for the US unit to train for the deployment of forces from a sea port to a training location, and during it the troops will also get acquainted with a new geography and environmental conditions.

The American troops will cooperate and train with Lithuanian colleagues and other allies, exchange experience while implementing the mechanization of the Lithuanian Land Force. Lithuania will ensure full Host Nation Support (lodging, logistical support, etc.) and access to infrastructure of Lithuania's military training areas to the deploying U.S. troops.

A company-size unit of US troops was stationed in Lithuania on a rotational basis in 2014-2017. It was a smaller unit of around 200 troops.

"We have not seen rotational forces of that type, and the arrival of a battalion after we had a company for several years after 2014 demonstrates a serious attitude towards us and serious involvement as these are the US units that, are, first of all, involved in training," Karoblis said.

A German-led NATO battalion is also stationed in Lithuania at the moment, and allied fighter jets in are stationed in Siauliai as part of NATO's air policing mission.

Lithuania may increase contribution in Mali and Afghanistan

The Defense Ministry will propose to somewhat increase Lithuania's military contribution to...