BNS
aA
A total of 837 reports on adverse reactions to COVID-19 vaccine jabs were received in Lithuania in April and the majority of them were related to the AstraZeneca vaccine, the State Medicines Control Agency said on Monday. 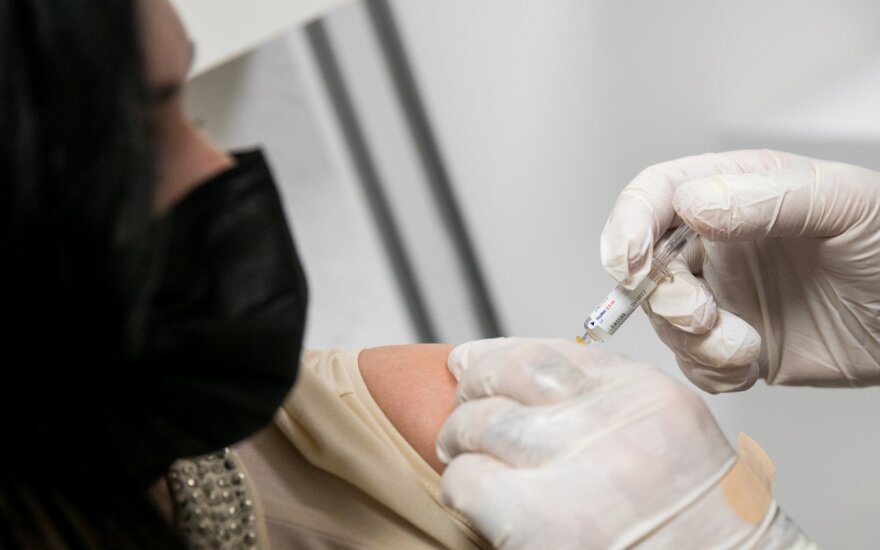 “Four vaccines available in the market are used for vaccinating Lithuania’s residents now and 837 reports on suspected adverse reactions were received during the fourth month of vaccination,” Gytis Andrulionis, the head of the agency, said at a news conference.

Out of the total April reports on adverse reactions, 218 reports were related to the Pfizer/BioNTech vaccine, 58 had to do with the Moderna vaccine, and 559 were linked to the AstraZeneca vaccine.

“This vaccine is absolutely dominant in terms of reports,” Andrulionis said of the AstraZeneca’s vaccine.

He guessed that this might be related to a stronger reaction to this vaccine after getting its first jab.

The agency did not receive any reports related to the Johnson&Johnson vaccine last month, which, in its view, might be related to a very small number of people who had received a shot of this vaccine thus far.

Two of the reports did not identify the vaccine used.

Out of the total reports received in April, 795 were classified as being of mild or moderate severity and 42 were severe.

“In most cases, the adverse reactions reported to the Medicines Control Agency are similar to those reported in previous months, such as pain, swelling, redness around the place of injection, pain in the arm, shiver, headache, rash and fever. Same as previously, in previous months, mild reactions go away after one or several days,” Andriulionis said.

Approximately one-fourth of April reports were made by men, and the remaining three-fourths – by women. The age of the people who made the reports ranged from 18 to 95.

In absolute numbers, most of severe adverse reactions were linked to the Pfizer vaccine.

“There have been reactions when people experience certain undefined adverse events, which may not look severe from an objective point of view but people describe them as a severe adverse reaction, such as numbness, very poor general well-being, a spike in blood pressure,” the agency’s representative said.

Most of those reactions were reported for all vaccines.

Four deaths reported, found not to be linked to vaccines

The agency also received reports about deaths of four patients, aged 55–83, two of whom received shots of the AstraZeneca vaccine, the third one was administered the Pfizer vaccine, and the fourth – the Moderna vaccine. Two of those deceased were men and the other two were women.

“We do not link any of these deaths directly to vaccination, i.e. to an adverse reaction triggered by the vaccine”, Piviniene said.

A woman aged 83, who passed away from stroke shortly after getting a vaccine jab, had chronic diseases. A 78-year-old man in Klaipeda reportedly died of a cardiac cause at the vaccination center.

In Vilnius, a man aged 55 died suddenly at work a day after vaccination and the agency had no evidence that he had suffered any adverse reactions after getting a vaccine shot.

In Taurage, a woman aged 64 died of pneumonia caused by COVID-19 and the agency was unaware whether she had received both vaccine doses.

“That death is not directly related to vaccination. It’s just that a person died of COVID-19 disease despite getting vaccinated,” the agency’s representative said.

Overall, 2,579 reports on adverse reactions to COVID-19 vaccines were received in Lithuania during the first four months of vaccination, which accounted to 0.27 percent of the total number of vaccine shots administered.

Compared to other countries, the number of reports on adverse reactions received in Lithuania had been limited, Pilviniene pointed out.

Lithuania is planning to start administering OCIVD-19 vaccine shots to people aged 55 years and over...

Mass vaccination to be started in May

Lithuania will begin mass vaccination of the population in May, earlier than expected, Health Minister...

Lithuania has registered 504 new coronavirus infections and seven deaths from COVID-19 over the...

Lithuania on Monday launches a national electronic registration system for COVID-19 vaccine, which...

Mass vaccination is starting in Lithuania on Monday as all residents over the age of 16 can get the jab.