There are much more problems in oceans than plastic: Lithuanian diver joined team to help

Ugnė Karaliūnaitė
Parašyti
autoriui
aA
A huge amount of plastic in a dead whale's body, dying seashore birds from plastic stuff in their stomachs, danger of microplastic in every drop of water we consume. These are just some problems human activity creates on our planet. Despite all the damage plastic does to nature more and more people start talking about another issue - fishing. 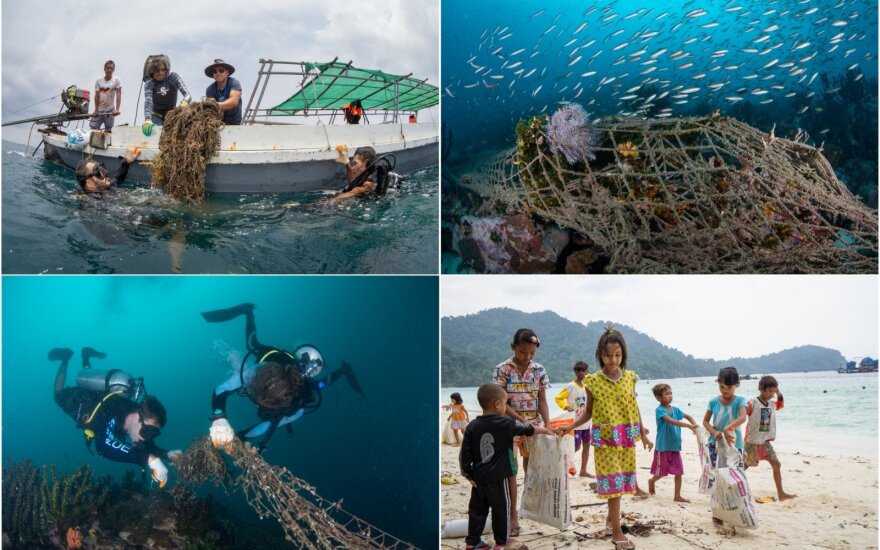 Although the biggest negative impact made for oceans due to fishing is related to industrial fishing, local fishermen also have their input into pollution waters by leaving old fishing nets deep in the seas and oceans.

Lithuanian Gintarė Krūminaitė, currently living in Denmark, joined the international team for the project in Burma to save waters from old abandoned fishing nets and other gear.

20 years ago the United Nations announced that there are around 640 thousands tons of ghost nets in our oceans. Besides fishing nets, there are plenty of hooks, fishing-lines and other fishermen's used gear that makes the life of marine live tough. Marine biologist Marcelo Guimaraes, who also was participating in the same project, once said that it takes around 600 years for a nylon fishing net to decompose. He called ghost fishing nets as being "silent killer of the seas".

During the project that was held this May nine divers and five crew members were working four days next to the shores in Myanmar. After all dives, they managed to collect around 300 kg of waste. To reach some they had to descend to 25 meters depth.

Fall in love with diving 6 years ago

As Lithuanian G.Krūminaitė told DELFI she started diving 6 years ago. After her Open Water Course, she kept diving time after time and later decided to become an instructor. After finishing courses in Thailand, Koh Phi Phi island she stayed there to work as a diving instructor for a year.

However, Lithuanian did not think just about the money she can earn from tourist. She started following what impact on the seas and oceans does human activity has. She also joined the project for corral restoration.

During this project, she met Anuar Abdulla that invited her to join the project for saving Myanmar's shores form the ghost nets. Although the woman was already back to Europe she agreed to join the team for the work when she was back to Thailand for her holidays.

"If you compare Myanmar with Thailand here corral reed is more healthy because Myanmar still does not have so much tourism. At the same time, the country's waters suffer from ghost nets problems. No one controls fishing or its impact there", notices G. Krūminaitė.

As Lithuanian explained, each time the time descended to the sea they would found several sunk fishing nets. At the same time, the diver was happy that in them not so much dead sea life was found.
One day of the project was dedicated to the education of local children. According to G. Krūminaitė, the education of locals is one of the most important thing to make sure that the future of our planet was brighter.

"I suppose the majority of Southeast Asian countries suffer from the same problem - locals through trashes anywhere, they do not recycle them. The same happens with fishing nets. Some get lost during fishing trips but some are just thrown anywhere after they are not used anymore and end up in a sea", continued Lithuanian.

Despite that G. Krūminaitė also noticed that the awareness about sustainability and ecology grow among South East Asian people. Nevertheless, it is more noticed in touristic places.

"I can see that it is more and more done regarding sustainability in the last years. Local people are starting to understand that with all waste they are losing attractiveness of their places. On the other hand, in remote areas local people still watch Westerners strangely when they start collecting trashes from beaches", added she.

The Lithuanian Foreign Ministry said on Wednesday that it has allocated 20,000 euros in humanitarian...

Lithuania still has room for improvement in terms of recycling

The fast growth of human consumption is the main cause of decreasing land resources and its pollution....

How much municipal waste does each Lithuanian generate?

The amount of municipal waste generated per person in the European Union (EU) in 2017 is estimated...

There are currently two main global problems regarding plastic packaging . Firstly, how to reduce the...