The gay kiss that could change a city in Lithuania

aA
While Lithuania still struggles to defend equal rights for all her citizens, some of them are tired of waiting and are starting to take brave initiatives to change their society themselves. One such initiative is the Friendly Kaunas map, launched on Monday, July 31st. 10,000 free copies will be distributed across Kaunas, Lithuania’s second city. 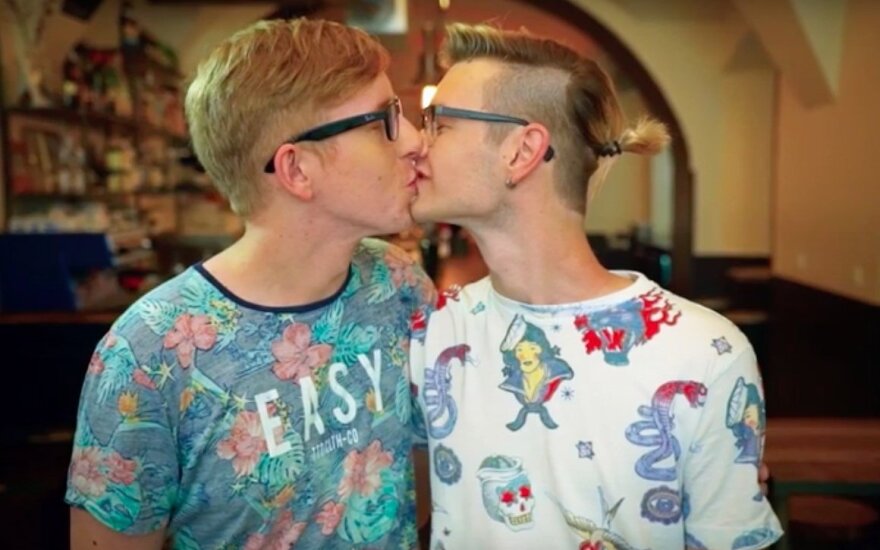 This is the first edition of Friendly Kaunas, coming after the concept launched in Vilnius, the capital city. Friendly Vilnius has so far successfully released five maps, highlighting LGBT-friendly establishments since 2012. Since last year, the project also includes other “friendly” categories, encouraging members of the scheme to have wheelchair access, vegan options or simply to be welcoming to pets. Both maps are also available online at FriendlyVilnius.com and FriendlyKaunas.com.

While the original map was conceived by filmmaker Romas Zabarauskas and co-founded by Vilnius City Councillor Mark Adam Harold, the hero behind Friendly Kaunas is Pijus Beizaras. A simple Facebook photo of a kiss between him and his boyfriend Mangirdas Levickas went viral in Lithuania and received a lot of hateful comments, including death threats. The authorities refused to investigate the case, but that only inspired Beizaras to fight back. With the help of national LGBT+ rights organisation LGL, Beizaras and his boyfriend initiated proceedings against the Lithuanian authorities, and their case has recently been accepted by the European Court of Human Rights in Strasbourg. Beizaras began work as a human rights activist and brought the map project to Kaunas.

While waiting for the international trial, Beizaras remains optimistic about the prospects for Friendly Kaunas. “There were some difficult moments but in the end all the challenges were met, and for that reason I'm truly proud of our team as well as my hometown Kaunas.”, – said Pijus Beizaras at the launch of Friendly Kaunas: “I'm sure that more venues will join next year as Kaunas truly keeps becoming more open and diverse.”

More than 50 venues of Friendly Vilnius and over 20 Kaunas venues declare their support for LGBT equality and offer all people a variety of services – the maps include not only cafes, bars, restaurants, but also hotels, shops and beauty salons. A gay-friendly trip to Lithuania could easily be planned to coincide with special events such as Baltic Pride, the Vilnius LGBT Film Festival “Kreivės”, or the queer community summer festival “Sapfo Fest”, among many other events.

While Lithuania is often criticised for homophobic laws and attitudes, her big cities are taking their...

IDAHOT (International Day of Homophobia and Transphobia), celebrated around the world on May 17, was...

Lithuania's Justice Ministry has drafted a bill that would allow transgender individuals to have their...