...
BNS
aA
Thousands of people took part in the traditional LGBTIQ March for Equality and Peace in central Vilnius on Saturday, calling on politicians to hear the community's expectations. 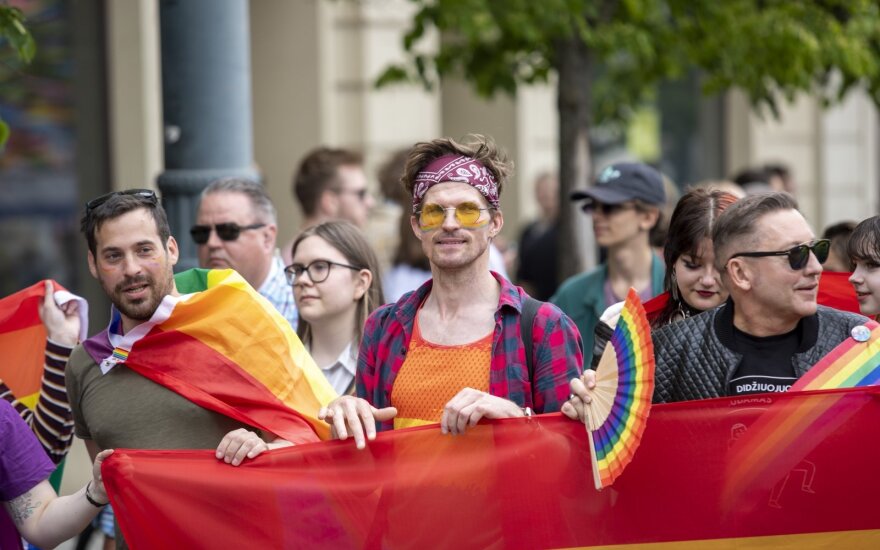 The late afternoon procession started at the Bernardine Garden and reached the White Bridge a little over an hour later where a concert was organized. The procession included a dozen cars and buses decorated in rainbow colors and playing music as other participants were dancing nearby.

The Baltic Pride in Vilnius was attended by members of the show business, public figures, Lithuanian and foreign politicians and diplomats.

No incidents were reported during the event, Vilnius police said, adding that over 4,500 people took part in the march. The organizers had estimated that up to 10,000 people would attend.

Vladimir Simonko, the leader of the Lithuanian Gay League (LGL) and one of the organizers, told BNS that the society is becoming more tolerant, which is why the event is becoming more and more of a celebration than a protest. However, the changes "are not uniform everywhere" he pointed out.

"We see the society changing, becoming more open, but our politicians are lagging behind a bit. We are trying to send them a message that we are voters too, and you have to hear us and see us", he said.

Opponents of the Baltic Pride invited people for a public prayer in the central Cathedral Square, and public figure Kristupas Krivickas invited people to an event "For a Traditional Family" in the Vingis Park.

A dozen of people who prayed were also joined by up to ten protesters holding banners against the LGBTIQ community, but they refused to talk to the media.

Following years of calls by the LGBTIQ community in Lithuania for politicians to legalize partnerships, the country's parliament started debating two alternative bills in May, and they are aimed at regulating relationships between unmarried people living together. One of the bills would allow couples to enter into a civil union, and the other one drafted by more conservative politicians, would amend the Civil Code to introduce a concept of "a close relationship".

Neither male-female, nor same-sex partnerships are legal in Lithuania. Several previous attempts by liberal politicians to legalize civil partnerships in the Seimas failed.

Since 2010, sexual minorities hold Baltic Price marches in Vilnius every three years, and the event takes place in Riga and Tallinn in other years.

The organizers of the Baltic Pride march to be held in Vilnius in a week expects 10,000 people to...