Lithuania utterly destroys Senegal in a fantastic start to the tournament

Neal Maloney,
DELFI EN
aA
I must admit I thought LT was going to win against Senegal, all the basketball specialists had their team towards the bottom of the power rankings. There’s no way however, I could have expected this. From start to finish, Lithuania dominated their opponent and kept the pressure on, even when they were nearing a 60 point lead. At the end of this bloodbath, the green machine had to settle for a 54 point margin of victory 101:47 (27:10, 21:11, 29:12, 24:14). 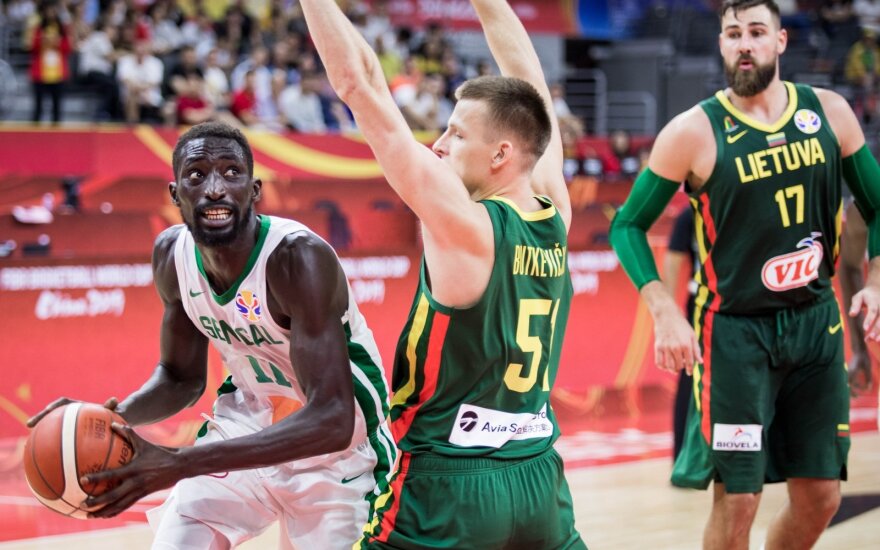 Dainius Adomaitis started this one with basically the same group he did during most of the preparation matches. He kept the NBA tandem of JV and Domas, while rounding out the squad with Jonas Mačiulis, Marius Grigonis and Mantas Kalnietis at the point. This time it worked beautifully, unlike a couple of times in preparation matches when it was sluggish. Four of that starting 5 scored early on in typical Lithuanian, unselfish fashion. The green guys started the game with an 11-2 lead.

The early leaders for team LT were Marius Grigonis(7 early points), JV(6 early points), and Mantas Kalnietis(7 early points). The team expanded their lead to 23:8 late in the first quarter. The offense was firing on all cylinders but Lithuania’s defense was even better, with a noticeable intensity increase to start the tournament.

Once Dainius Adomaitis went to his bench, Lithuania showed how much their depth is truly a weapon. Lukas Lekavičius was firmly in control of the second unit as a capable back-up point guard and his running mates Renaldas Seibutis, Paulius Jankunas and Mindaugas Kuzminskas helped continue the scoring onslaught while both JV and Domas were getting their rest. By halftime, the lead ballooned to 48:21. You could see the frustration in the eyes of the Senegal players, I seriously doubt they expected this prior to game time.

Second half the destruction continues

In the second half, LT came out just as aggressively as the first, Kalnietis set the tone by draining one of his calling card pull-up three pointers on the very first play. He continued by hitting yet another one a couple of plays later and then, Grigonis got fouled beyond the arc and made all three free throws. The lead just like that expanded to 35 points(57:22) before the first subs came off Lithuania’s bench in the half.

At this point, Lithuania realized they were probably going to win this one and started gambling for steals, not usually something in Lithuania’s usually conservative defensive game plan. It paid off and the bench mob for LT got multiple scores in transition off of these steals. The best one was an amazing “alley-oop” dunk by Arnas Butkevičius from Lukas Lekavičius after he picked off an errant pass. Another extremely awesome transition basket came from JV, who couldn’t let his teammates have all the fun. In a throwback to his gold medal days as a leader on Lithuania’s championship youth team, he had a ferocious slam dunk as the finisher in a fast break with Lekavičius and Butkevičius. By the end of three, the score was 77:33 with LT firmly in control.

The fourth quarter witnessed the bloodbath continue, there wasn’t a moment in this game that it felt like Senegal was playing well. Their team was similar in playing style to their fellow African, Angolan team, with several individually good players but very little coordination and team passing. This whole entire period was “garbage time”, meaning there’s no chance that the other team could overcome a 35 plus point defecit, and LT had already won. Adomaitis chose to keep his starters in including both NBA studs as the lead just kept getting bigger. This was something I don’t understand as a decision from the coach. The lead got up to 59 points at one point late in the game, and JV was still in the game. There is just no reason he should have been playing. When the coach finally did take him out with 6:20 left, he actually put Domantas Sabonis in to take his place.
Both of these players are indispensable members of the Lithuanian lineup and having them healthy is the best chance of the green guys standing on the medal podium. Why on God’s green earth would the coach have his two studs in the game when it was clearly decided and your deep bench can finish the job easily? As the final buzzer sounded, Paulius Jankunas got the last bucket to give Lithuania over 100 points. The final tally was 101:47 in this beatdown.

1) Dainius Adomaitis has no business playing his two NBA players when the team is up by 50 points late in the game. Yes, in the FIBA version of the game scoring points does matter much more than the North American game, where teams will always clear their bench with a huge lead late in the game. Points can be used as tie-breakers in the group play part of FIBA tournaments so it’s good to have a game that you won by 50+ points against to give yourself a bigger cushion. The problem with leaving JV and Domas in the game late is if you lose them to a stupid injury, you might lose actual games in the tournament, which is a far worse outcome. It would have been perfect to have Martynas Gebenas, Adomaitis final cut to bring the roster to 12, who would have finished this one and helped Lithuania maintain their huge lead.

2) Psychologically, a win like this is both good and bad for a team. It is good because it scares the hell out of the future opponents they will face. It is also bad because it could lead to a sense of overconfident complacency where maybe Lithuania comes out flat against their Canadian opponent. There is no way Canada will be going out like Senegal, they are a much better team. It was a good sign after this match when some Lithuanian news portal was interviewing Mantas Kalnietis and wanted to give him some random award. Mantas replied,” I don’t really care about any awards, all I’m thinking about is the game against Canada”. He wasn’t rude about it, he ended up taking the award, but you could tell he is intently focused on what will definitely be a stronger opponent in the Canadians. This is a good thing.

Another good thing is the fact that he was the leading scorer for team LT, tied with JV and Domas at 13 points each. We knew JV and Domas would get going as scorers that’s what they do, but Kalnietis early in the preparation matches did not look like the reliable scorer we all know and love. He definitely did in this game however. If his three pointer keeps falling, this will be a potent inside-out weapon for the green machine.

3) Once again Lithuania’s depth tells the tale. In this one, literally everyone with the exception of Rokas Giedraitis scored for the team. It’s definitely not Lithuanian athleticism that won this one as decisively as they did. The primary difference between LT and Senegal was the fact that Senegal played selfishly and Lithuania played unselfish to a fault. That is how you win basketball games and LT’s team chemistry is damn good!

In the final analysis, Lithuanians can exhale a little bit after a huge win like this to start the tournament. It breaks the ice so to speak and helps build confidence. They should immediately however start focusing on their next opponent rather than celebrating, it is almost a guarantee that both of their group H opponents will also dispatch Senegal. This is a very good start to this tournament though and an outcome we are surprised but not totally shocked by. This is due to the fact that we as LT hoops fans KNOW how good our team is!

Lithuania slightly above EU average in terms of number of smokers

Some 28 percent of residents of Lithuania smoke, which is 5 percent more than the European Union...