Lithuania eliminates Canada convincingly and advances to the next round

...
Neal Maloney,
DELFI EN
aA
On Tuesday, Lithuania faced a much stronger opponent in Canada than they did against Senegal. It was obvious right from the start that Canada was playing with the aggression level of a team trying hard to avoid elimination. Unfortunately for them, however, Lithuania was playing like they usually do, a team with solid fundamentals, depth and team chemistry that also really wanted to win. When the smoke cleared, the green machine punched their ticket for the next round, torching Canada and sending them home 92:69 (24:14, 22:22, 24:18, 22:15). 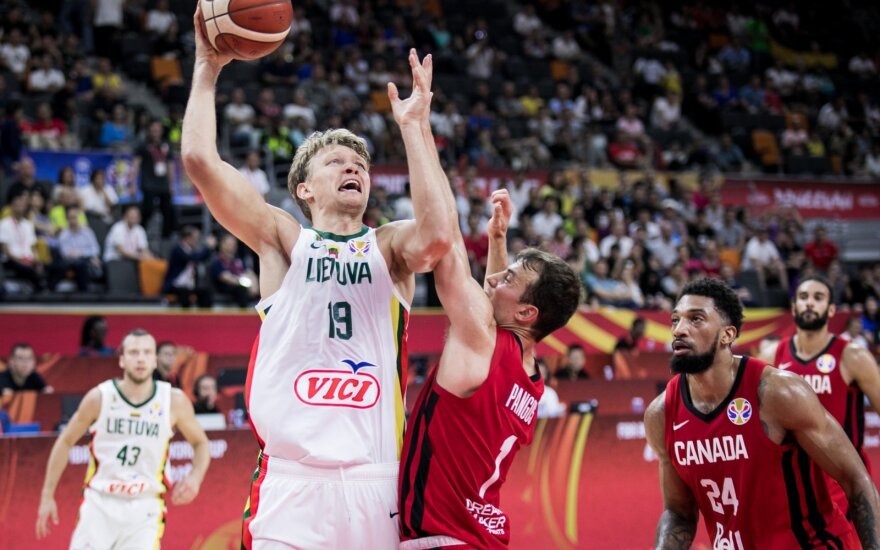 Dainius Adomaitis has been fairly consistent in his starting lineups so far, putting in Kalnietis, Grigonis and Mačiulis, along with the NBA duo of JV and Domas to start most contests. Early on, staunch defense by the green machine helped to stifle many of Canada’s early shots, but Lithuania wasn’t being very accurate either after Mantas Kalnietis pulled up and iced a mid-range jumper 7 seconds into the game. Canada’s defense was aggressive, especially on JV in the post. Their team was under strict orders by the coach to double team him every time he caught the ball down low. After a few minutes of this strategy however, Jonas began passing out of the post and getting the ball to his teammates who showed why LT is a very deep squad. Edgaras Ulanovas, a player who had not played well at all during any of the preparation matches, finally had a breakout game after replacing Sabonis early on. He scored 8 quick points for the green guys, and was very effective in the first period, helping LT establish a ten point lead after one quarter 24:14.

In the second quarter, Lithuania expanded their lead off of several made three pointers by Mantas Kalnietis, Marius Grigonis and Mindaugas Kuzminskas. The lead ballooned to 16 points 39:23 with four minutes left to go in the half. Foul trouble by both Lithuania’s big men forced Adomaitis to insert Paulius Jankunas at center and Canada quickly capitalized by going on a 7-0 run to get them within single digits towards the end of the half. Ulanovas continued his solid play and helped LT stabilize by halftime, still in the exact same position they were at then end of the first, up ten points 46:36.

Second half they couldn’t contain JV and Domas any longer

Lithuanian fans had reason to be a little uneasy going into the second, Canada seemed to have an answer for LT, scoring the exact same amount of points as their opponent in the second period. Always known as a good three point shooting, and fast breaking team, they seemed long overdue to rain down some rapid death on Lithuania from beyond the arc. As it turns out though, aside from a couple three pointers, their shots from downtown went mostly stifled by the solid defense of the green machine.

Adomaitis opted to go with the hot hand early on by replacing Domas with Ulanovas, who was on a rampage in the first. While the Canadian defense focused on him, JV finally unleashed his inner beast despite the standing order by Canada coach Nick Nurse to double-team him every time. Whenever JV would get overwhelmed, he would just kick out to teammates smartly, and perimeter players like Kalnietis would then go to work. This potent “inside-out” game was the single biggest reason LT won a silver medal in the 2015 EuroBasket, and its a great sign that it is becoming a weapon this year too! Once JV got into foul trouble and had to come out, his NBA running mate Domas came in and started getting buckets inside as well. He was aided by Lithuania’s “bench mob” of Arnas Butkevičius, Renaldas Seibutis, Lukas Lekavičius and Mindaugas Kuzminskas, who all chipped in to keep Lithuania in control despite furious attempts by Canada to fight back. By the end of the third, Lithuania expanded their lead to 16 points, and headed into the final stanza cautiously optimistic.

In the fourth quarter, Lithuania put Canada away with an interesting new strategy they really haven’t tried much. Adomaitis put JV and Domas in together and took out Mindaugas Kuzminskas at about 7:14 left in the game when Canada was down by only 11 points and still within striking distance. This is the first time both the NBA studs have been used together in crunch time(end game) and it worked VERY well. It was especially heartening to see the “big-to-big” passing between JV and Domas. It was like trying to play “whack-a-mole”, as soon as they double teamed one NBA center, they would unselfishly pass to the other for an easy score inside. This strategy worked so well Lithuania’s lead ballooned to 20 points and the Canadians realized at this point they were doomed. The final tally was 90:69 with the green machine advancing and the Canadians going home (after group play).

1) The big-to-big passing between JV and Domas was by far the best takeaway from this game. Up until this point, both NBA centers together has been a little used lineup despite the fact that they start most games together. Against a smaller team like Canada, having two dominant and unselfish big men can really be an overwhelming advantage, which it definitely was today. Surrounded by the best three point shooters for a kick-out option, they become a potent weapon indeed. It hasn’t seemed like they have been really good together because almost every time they actually play together, it is early in the game and neither player is in rhythm. Late in the game however, once they already have achieved near double-doubles, putting them in together is a whole new world. Dainius Adomaitis might have just unlocked a very potent weapon indeed!

2) Rebounding for Lithuania has been the unsung hero, very solid thus far in the tournament. In this one, They were 46-27 over their smaller opponents on the glass, nearly two to one ratio. Part of the reason for this is definitely due to JV and Domas both being monsters, but their minutes weren’t that big tonight due to foul trouble.The actual reason for this huge advantage is Lithuania has size at every position. With the exception of the diminutive Lekavičius, I believe LT had a big edge in stature over their opponents across the board. In addition to this, players like Arnas Butkevičius epitomize the effort that LT is ingrained with. When you see a player like Arnas diving after loose balls, it helps the rest of the team have that same aggressive mentality. It was very scary however late in the game when Arnas athletically jumped over Khlem Birch, Canada’s center, while trying to secure a rebound and lost his balance which led to an extremely hard fall on the court. Although he came up clutching his neck in pain, he ultimately seemed fine and ended up finishing the game. It’s that kind of effort though, that is showing why LT is definitely a contender this year!

3) Players like Butkevičius also epitomize the depth of team LT. There is not one single player on Lithuania’s roster that you feel like there is a drop off once inserted into a game. Lekavičius has been outstanding as a back-up for Kalnietis, a big part of the reason LT’s veteran point guard has been coming out of his shell and scoring a lot lately. Fatigue is not a factor because Adomaitis can give Kalnietis a rest and still feel like the game is under control with Lekavičius at the helm. This is a luxury that we have not had much of in past years. We usually had Kalnietis and the an aged Šarunas Jasikevičius or a transplanted shooting guard like Adas Juskevičius playing the back-up point guard role. This year, we finally have the depth to really give the starters a proper rest. It’s no coincidence that Seibutis playing off the bench helps stabilize this second unit back-court too, this experiment with him coming off the bench and Marius Grigonis starting at shooting guard is working out great. This way there’s youth combined with experience any way you slice it!

Lithuania is now officially 2-0, no better way to start the tournament that’s for sure. They have secured their place in the next round, a place they have been as a squad many times before. They are playing well with a potent version of inside-out basketball with enough three point shooting to unleash the two-headed “Kraken” of Domas and Jonas to do serious damage inside. Seeing the satisfied look on Arvydas Sabonis face as Lithuania was pulling away toward the finish line said a thousand words. They should not celebrate just yet though. I can’t emphasize how important the next game is against Australia. If they win, they will likely avoid having to play France, a very good team that has given LT many problems in the past. They are definitely capable of beating Australia, they have proven this time and again. Now they just need to do it!

Lithuania with a bigger comeback and bigger disappointment losing to France

This was probably the most heartbreaking game I’ve ever had to watch as a lifelong Lithuanian...

The number of foreign visitors to Lithuanian museums has declined by nearly 70 percent, due partly to...