Inspired by NASA: a first unmanned aerial vehicle based on a bird’s flight constructed 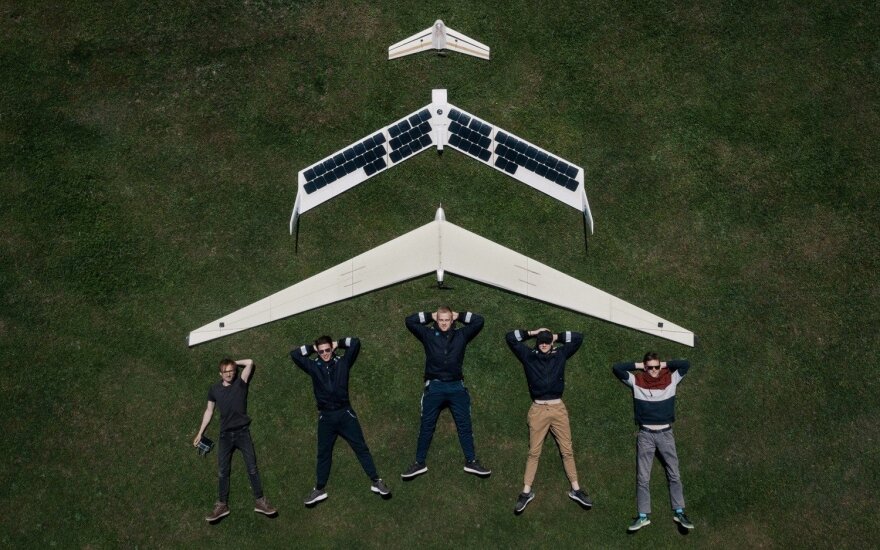 Based on theoretical calculations of NASA’s scientists, a new model of UAV has been constructed at the Laboratory of Aeronautics at Antanas Gustaitis Aviation Institute at Vilnius Gediminas Technical University (VGTU AGAI). It is a prototype of Solarwing2 – a first and the only one solar-powered fixed-wing UAV in Lithuania with a design based on a bird’s flight.

Related articles
Invisible weapons: why radio communication was crucial in many battles?
Lithuanian military allowed to shoot down unwanted drones

The tested flying wing type UAV can fly up to eight hours when charged fully. The researchers are developing the technology further to extend the flying time up to 24 hours. The new UAV constructed by young researchers at VGTU was noticed by NASA scientist Albion H. Bowers, when Povilas Karalkevičius, one of its creators, met him in the US.

The creators of the wing were driven by the curiosity to learn more about this type of wings and were fascinated with the simplicity and exclusivity of the construction. At first, flying wings seemed rather simple, but the deeper analysis revealed that it is a complex aerodynamic system, and just two horizontal aerodynamic surfaces that control UAV can provide a stable flying platform.

“When we set our goals for constructing the cutting edge solar-powered UAV, we were not sure what the solutions will be. We started from the search of information and found the work of NASA scientist Albion H. Bowers useful. He carried out calculations and provided examples on birds’ flight which is stable and flawless even though they do not have any vertical aerodynamic surfaces,” says P. Karalkevičius.

According to theoretical calculations, if the wingspan is 22% longer, as compared with a wing with elliptical lift distribution, the induced drag is reduced by 11%. “In addition, aircraft can soar if it is banked by moving ailerons in making a turn and specific aircraft list and yaw is reached. This is due to bell-shaped lift distribution on the wing. That is why we see birds soaring in the sky without any vertical aerodynamic surfaces,” says Povilas.

This flying wing differs from the other UAVs previously constructed at VGTU AGAI with its unusual bell-shaped lift distribution on the wing. Povilas notes, that this type of aircraft does not have any vertical surfaces, but still maintains correct flight path both in linear movement and in banking. This type of aircraft is an alternative platform for conventional aircraft, but it has different construction with its different positive and negative aspects.

“In conventional aircrafts lift force is generated by the wing. The rest of an aircraft is designated to carry payload and it creates resistance or lift-induced drag. Whereas in flying wing type aircraft, the lift is generated by the whole or major part of a wing, and if the lift force is distributed correctly then it is possible to create lighter construction of a wing. Moreover, aerodynamic losses can be reduced even more if payload is placed inside a wing,” explains Povilas noting that in aviation industry one must constantly seek for a compromise.

This type of aircraft has very wide application: surveillance of various objects, rescue missions, making orthographic maps, carrying out scientific experiments. Construction of a flying wing type UAVs is simpler. Accordingly, the manufacturing process and, later, exploitation of the construction is easier as well.

An autopilot system is installed on the flying wing type UAV and it can be operated either automatically or manually. It is possible to change its flight path, speed and to manage other parameters of an aircraft according to weather conditions, air traffic intensity, visible obstacles. During the manufacturing process, scientists estimated the amount of energy to be received from solar cells on wings needed to fly in daytime and night time. There are plans to build such aircraft in the near future.

Lithuania's Armed Forces has been authorized to shoot down unwanted drones , as the increasingly...

The scope of robotic process automation and the need for creativity in the market increases rapidly....

Cooperation on science projects is ongoing between Vilnius Gediminas Technical University (VGTU) and...