Greg Monroe on the brawl with Jonas Valančiūnas: I would much rather play with a tough guy like Jonas than some timid player

EN.DELFI
aA
The Toronto Raptors are getting ready for the upcoming basketball season this year by putting together a dominant duo in the front court. Masai Ujiri, general manager of the team, believes that Greg Monroe who split his time last year between Milwaukee, Phoenix and Boston, can provide a very capable back-up for Jonas Valančiūnas in the centre role. Monroe fielded questions from Canadian news media outlets in reference to the 2017 incident during the playoffs between himself and Jonas Valančiūnas, which was basically a shoving match between the two. He responded by expressing a positive outlook about that situation. 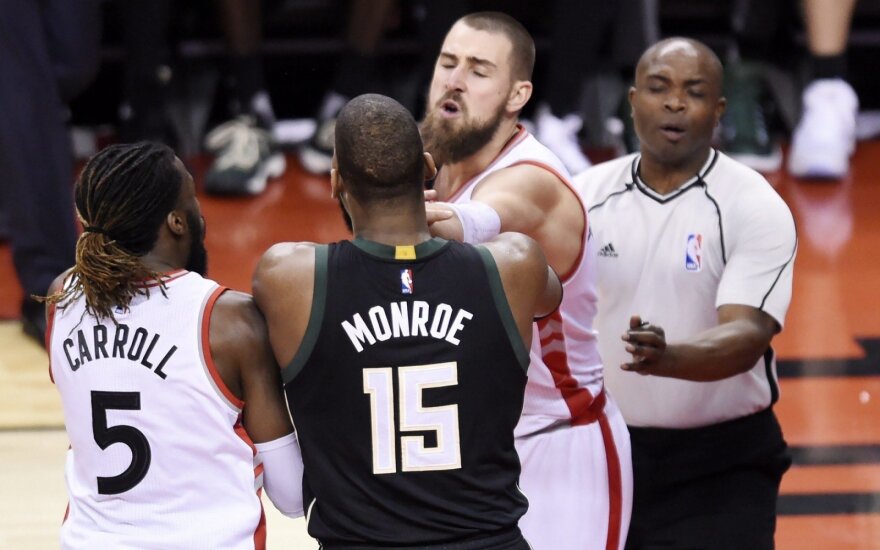 Monroe, who's nickname is "Moose", has played in the NBA since 2010, putting up very impressive numbers at the start of his career. During his first five seasons with the Detroit "Pistons", he played the power-forward position, but after he left Michigan, he went back to playing at the centre spot.

During the past NBA season, which he played with Milwaukee, Phoenix and Boston, the frequently traded Monroe averaged 10.3 points and 6.9 rebounds per game. Monroe, while playing with the Boston "Celtics", even reached the Eastern conference finals, however he really only played limited minutes during those playoff series. Playing an average of only 9.5 minutes a game the big man struggled, averaging a mere 4.8 points per game.

Monroe signed with the Raptors exactly one week ago for the minimum salary of 2.2 million dollars, taking over the role of back-up centre from Jakob Poetel, who was recently traded by the Raptors to the San Antonio Spurs.

While speaking with Canadian media, Monroe revealed that over the summer he has been working hard to sharpen up his game. He is trying to become a more mobile big man and a more versatile one too, adding the three-pointer to his basketball arsenal. Throughout his entire NBA career, "Moose" hasn't made a single one of his twelve three-point attempts.

During the interview, the American was also asked about his shoving match with Valančiūnas, which happened more than a year ago while the Raptors faced off in the first round of the playoffs against Monroe's Milwaukee "Bucks". Moose explained that big men in basketball tend to get physical with one another as the reason behind the scuffle, "Fights occur during these situations where the big men are battling for position. On my team, I would much rather have an aggressive player (like Jonas) rather than someone who's scared and shies away from the contact. Both of us refuse to give an inch to the opposition, and the fact that two personalities like ourselves are now on the same
team should make this a really fun season."

The first game Monroe and Valančiunas take the court together for the 2018-19 season will be on October 17th. The restocked Raptors will start the season at home against a Cleveland "Cavaliers" team playing without their superstar LeBron James, who left the team in free agency.

An in-depth analysis of Lithuania’s national basketball team after the third window games!

About 6 minutes into Lithuania’s first game versus Poland on June 28th, I was thinking to myself...

Domantas Sabonis: I would like to finish my career in Žalgiris

On June 18, Kaunas Žalgiris players celebrated the 20th championship in club history and also their...

Šarūnas Jasikevičius is staying in Kaunas for at least another year. This is perhaps the most...

BC Žalgiris Kaunas makes it to Euroleague Final Four

BC Žalgiris Kaunas has made it to the Euroleague Final Four for the first time since 1999.