Neal Maloney,
DELFI EN
aA
In the end, Lithuania beat themselves in this one. It was a combination of factors that contributed to their poor play during the first half and stifled their amazing comeback late in the second to give Australia the victory over their group H rivals today. The final score was 87:82 (19:27, 22:25, 19:16, 22:19). 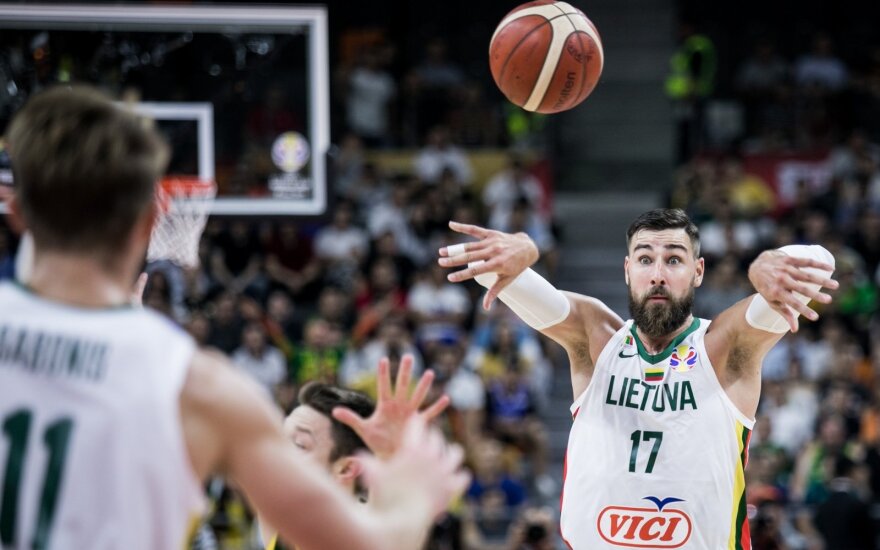 LT could not get their offense going and couldn’t stop the smoking hot three-point shooting of Australia early in the game, the Boomers dominated the first half from start to finish. Jonas Valančiunas was having one of his defensive “bad hair days” and couldn’t stop Aron Baynes, the center for Australia who had 23 points today. Although JV knows Baynes from playing against him in the NBA, apparently team LT didn’t get the scouting report that he can hit three pointers, even as a center. He made Lithuania pay three times from beyond the arc today for that lack of information.

The only ones scoring consistently for Lithuania today were Marius Grigonis, Lukas Lekavičius and Domantas Sabonis, who had 19 ,15, and 12 points respectively. Jonas Valančiunas had only 7 points in the contest. Ulanovas played solid defense, but couldn’t recapture his glory from the Canada game, he only scored 6 points. While Kalnietis did get 9 points, including two of the very few three pointers for LT, he only had dished out two assists today. When you are a team that predicates your game on passing, there was just too much isolation basketball today. This was not very effective against a well-polished team like Australia.

When JV struggled early on, coach Dainius Adomaitis did sit him out in favor of Domantas Sabonis, who played fairly well today. The problem was however, that the coach brought JV back in along with Paulius Jankunas, who was absolutely terrible in his short time on the court. At this point in the second quarter, the Australian lead ballooned to 15 points. Lithuania stabilized at the end of the half a little bit, but it can be a really tough slog when your best player(Jonas Valančiunas)doesn’t score his first basket until 3:00 minutes left in the half. The score going into the locker room was an 11 point lead 52:41 in favor of the Boomers.

As fans of Lithuania know good and well, their team has had some amazing comebacks over the years. It seems to be in the Lithuanian DNA to be down big and then fight all the way back from the brink.

In a change in lineups from the first half, Dainius Adomaitis replaced JV with Jonas Mačiulis, realizing the most effective lineups against Australia were smaller ones. This in hindsight was probably the right move, just with the wrong personnel. Although Mačiulis hit a clutch three today, that was his only bucket in the game. He really hasn’t been playing well throughout much of the tournament and even most of the preparation matches. The coach trusted his veteran though, while the younger, highly-versatile Mindaugas Kuzminskas noticeably sat on the bench.

Kuzminskas ultimately was inserted into the game right around the same time as he put in JV with the rest of the “bench mob”, at around 3:00 minutes left to go in the third period. This lineup by far was the most effective LT had the entire game. Lukas Lekavičius was getting easy buckets by dribble penetration against Australia and along with JV,Grigonis, and Kuzminskas the score went from being down 68:60 to being up 71:68, an 11-0 run for the green machine. The smoking hot three point shooting from Australia suddenly went cold and Lithuania capitalized with quick attacks deep into their territory, often leading to scores. It was also at this point in the game where JV was most effective, even though it was too little,too late. Kuzminskas wasn’t a high scorer, but you could feel the confident, well-rested energy he added to the team when he was in the game. It makes you wonder if he had played more that 10 minutes today what might have happened.

If there is such a thing as “Basketball Gods”, they were definitely angry with Lithuania today. Everything fell apart at the very end for them based on missed free throws and coaching errors from Adomaitis. Not trying to shovel manure on the man, but when Lukas Lekavičius and Marius Grigonis are your high scorers, you just don’t take them out so you can re-insert Kalnietis and Seibutis along with a non-shooting Ulanovas, JV and Domas. As a coach you know that if you got hot players who are in great rhythm, you ride those hot hands and let the chips fall where they may. The coach had different plans however and opted for this bizarre decision to bench these spark plugs with 4:24 left in the game. Soon, what was a lead for Lithuania turned into a deficit and in the last couple of minutes, although Lithuania made several valiant attempts to retake the lead , ultimately came up short. A three pointer from Australia’s NBA shooting guard Patty Mills was the dagger that put Australia up by 5 with less than a minute to go. Adomaitis did decide to put Grigonis and Lekavičius back in, realizing his mistake, but it was too little, too late with not enough time to help the situation. The final score was 87:82 , with Australia winning group H.

1) Adomaitis should have kept Lekavičius and Grigonis in the game when Lithuania came back and moved into the lead in the fourth quarter. As a coach, how can you justify pulling two players who were playing the best on the team? It’s just common sense, you ride the hot hand. Sure Kalnietis usually replaces Lekavičius around this time in the game, but why couldn’t he come in and replace Ulanovas who really wasn’t efficient today? One lineup that I think would have been very interesting for the coach to try is Lekavičius playing together with Kalnietis. This is one situation I can think of where having both point guards on the floor together would have been really helpful. This is often done in the NBA. Instead, he put in Seibutis and JV, keeping a fatigued Ulanovas in as well which just didn’t work. An ideal lineup at the very end of this game would have been: Kalnietis, Lekavičius, Grigonis, Kuzminskas, and Domas together. Seibutis , JV and Ulanovas were all playing poorly today for the most part and shouldn’t have been in during crunch time.

2) If the threes aren’t falling for Lithuania, you cannot afford the luxury of JV and Domas in together at the same time. Linas Kleiza mentioned in the post game show on DELFI that Lithuania shot a meager 15 percent today from beyond the arc. Without enough of a threat from the great beyond, the opposition can just pack the paint and shut down JV and Domas fairly easily. The Australians have good interior defense and it showed today. They relegated Lithuania to mid range jump shots and difficult floaters which simply weren’t enough to put them over the top and win this one. It seems like there is a negative “domino effect” if Lithuania’s big men aren’t playing well. They tend to internalize their missed shot attempts which end up costing the team because their regret turns into a lack of focus on the defensive end along with poor effort rebounding. I’m not saying this is a conscious decision on their part, but it is an inevitable fact of human nature sometimes. I’ve said it before and I say it now, JV needs to play defense FIRST, and let his offense game happen without forcing it. Today, it just seemed like he really wanted to score in the low post despite great interior defense by the Boomers, I’m pretty sure he didn’t kick the ball out even once to his teammates on the perimeter. This one-on-one game is not the Lithuanian way, and Adomaitis needs to emphasize this between now and the next game if they wish to bounce back.

3) The next game for Lithuania will be against France, a very tough team that like Australia, has given Lithuania much trouble in the past. It is a must-win game for the green guys. Strangely, this is why I feel like it will be a very close one and Lithuania will ultimately prevail despite the fact that France is ranked higher. Team LT always does best when their backs are against the wall and are coming off a tough loss like the one today. I hate to say it, but whenever LT has a bit of a cushion and the pressure is off, that’s when they tend to have these type of difficult losses. Now there is no more margin of error, it is win or go home!

I don’t think I can scream anymore, my voice is very hoarse from this tough loss today. Those are the ups and downs of basketball though. I still believe in LT as a team, Event after a bad game like this, they definitely still have all the weapons of a medal contender, they just lack a talented chef to mix the ingredients together for maximum effect. This I’m afraid, might be our Achilles heel this year. It’s just not wise to pull out players who are scoring and playing well if you are a basketball coach for whatever reason. That’s just beating yourself. Hindsight is 20/20 as they say, so let’s hope this learning experience will help the coach improve. There is now no more margin of error and in a way, I kind of feel sorry for the French, who might just be in for one hell of a fight from a green machine intent on bouncing back in this tournament!

Lithuania with a bigger comeback and bigger disappointment losing to France

This was probably the most heartbreaking game I’ve ever had to watch as a lifelong Lithuanian...

Lithuania goes home with a win. Analysis of the future of the National Team (1) 105

Dainius Adomaitis felt loose and free today. The weight of expectations from the world Lithuanian...