Construction of the Unity Square in Kaunas finished

DELFI EN
aA
SBA Group finished reconstructing the Unity Square in Kaunas and is opening the city's main square, which has been internationally recognised for its architecture, to the public. 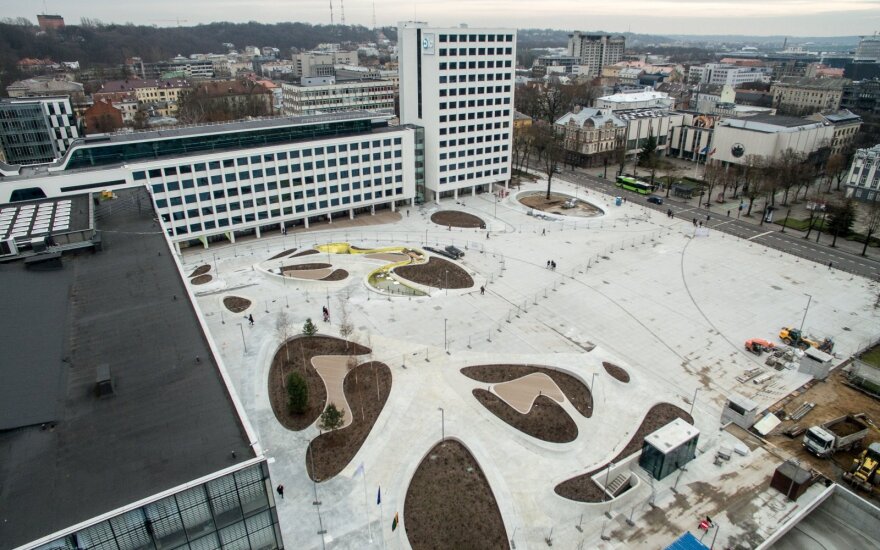 Completion of construction works of the revived square was celebrated with an unexpected and contrasting show performed by various artists of Kaunas, and with the activation of the most modern fountain in the country, the company writes in a press release.

Revived centre of the city's life

"The Unity Square has been revived for a new life. Our dream was to create a square for happy people in which smiling people of all ages would gather. A square that would symbolise a new, progressive, creative and free Lithuania, and would connect us with our honourable past and history whose noble legacy can be found right next to us. And if you meet a senior resting on one of the square's benches and enjoying a sandwich, a young man skateboarding nearby, a student dipping his feet in the creek and preparing for a lecture, or a mother with children who are playing happily in the square's fountain, I will be able to say that we have succeeded in realising this small but heart-warming dream. It makes it worth living and creating," says SBA Group's President Arūnas Martinkevičius.

Related articles
German who moved to live in Kaunas: I did not expect so much cultural life here
SBA to produce modular apartment buildings

According to him, all the square's construction works have been finished and the object was approved as fit for use. SBA company Urban Inventors began renovating the Unity Square in the second half of 2017. During reconstruction, the upper part of the square was substantially renewed by installing a new light-coloured road surface and green areas, planting mature trees, and forming unique hand-made plastic casting works from white concrete. The square was decorated with a fountain and an artificial creek. There are benches, lighting, renewed access areas, and an underground parking lot. SBA investments in the project exceeded 10 million euros. It is historically the largest investment in a central city square in Lithuania.

"This unrecognisably changed area of Kaunas is becoming livelier each day. It is no longer just a place to simply pass through – now you will want to stay here for a while. We’ve been seeing more and more people here for some time now, particularly youth. This project is an example of effective collaboration between the city and business. I have no doubt that the Unity Square is worth being one of the symbols of growing Kaunas," says Mayor of Kaunas City Visvaldas Matijošaitis while talking about the city’s new object of attraction.

Kaunas municipality contributed to the reconstruction of the Unity Square by buying a new granite road surface.

The architectural concept of the Unity Square situated next to Vytautas the Great War Museum, Freedom Monument and BLC business centre developed by SBA was created by architecture and design company 3Deluxe. Its implementation project was prepared by architect Rimantas Giedraitis in cooperation with the aforesaid company. A year and a half ago, the architectural concept of the Unity Square received the highest rating in the international Design Council awards established by the German Parliament. The project was placed first in the Urban Space category by an international jury of famous architects and designers. For the first time in history, first place was given to a project that was implemented in Lithuania.

"We are proud to have been part of this ambitious and innovative urban development project over the past years. In many aspects, the new Unity Square is an innovative project which will make an important contribution to the rich architectural history of the city. We have no doubt that people will soon take a liking to this square, turning it into a lively and bustling centre point of the city," says Peter Seipp, Head of 3Deluxe.

"We put a lot of effort into inviting famous German architects to work on this project that is particularly sensitive for all of us. It was not an easy decision, but now I can safely say that our effort has paid off," says A. Martinkevičius.

A class-A business centre complex BLC 2 designed by architects is being developed next to the Unity Square by SBA Group's company Urban Inventors. Its constructions were completed several months ago. The Group's total investments in the reconstruction of the square and landscaping comprise approximately 40 million euros.

A square with thousands of plants and legendary trees

During the renovation of the square, special attention was paid to the plants and trees in its green areas. In addition to several newly planted mature birch and pine trees, over 5,000 different dwarf plants were added to the square. According to biologist-dendrologist Danguolė Liagienė who prepared the square's landscaping project, one of the key goals of the landscaping concept was to ensure that the plants in the square are expressive all year round.

"With the help of these plants, we aimed to form solid, cosy, peaceful, but at the same time eye-catching green areas. Many of these plants are native to Lithuania, so we used them to create refreshing wildlife oases within the modern square whose full beauty will be revealed when the plants begin growing their leaves. The used plant groups will look decorative no matter the season. They are also dynamic, since some of them look more impressive in winter, while others reveal their beauty in summer, spring or autumn. That is why they will decorate and beautify the square all year round," says D. Liagienė.

A continuation of the legend associated with a special tree of the square was also preserved during the reconstruction. When preparing to renew the square, we had to say goodbye to an old, sick willow that was growing in it. According to one local legend, this tree may have been planted by singer Antanas Šabaniauskas. After hearing the legend, employee of the BLC business centre Benediktas Balčiūnas grew a shoot from one of the branches of the old willow which was then planted in the Unity Square. It managed to successfully survive through the winter and leaf out this spring. An oak planted 100 years ago by Vydūnas and Vaižgantas to celebrate the meeting of the Constituent Seimas was also preserved next to the highest building of the BLC business centre.

Since constructions of the Unity Square were completed during the quarantine, the square was opened to the public without any direct contact – with the help of music. An unexpected and unannounced show organised by Kaunas artists took place in the square. Since the location of the square symbolically connects two epochs – glorious interwar Kaunas and modern 21st century city – the Unity Square was filled with the songs of the temporary capital's musical legends Danielius Dolskis, Kipras Petrauskas and Antanas Šabaniauskas performed by Kaunas State Musical Theatre soloist Egidijus Bavikinas, followed by the most famous rapper in Kaunas Alekna (Andrius Aleknavičius) and singer Otreya (Ugnė Kudlaitė). Their performance was complemented with Alekna's hit song "Man patinka" which got millions of views online and became the unofficial anthem of Kaunas, followed by a show of extreme sports club members who impressed the public with their tricks performed with roller-blades, bicycles and skateboards.

During the symbolic opening of the square, a dancing fountain of 40 water jets and colourful lights was activated in the square. It is currently the most modern fountain in the country and will become a new place of attraction in Kaunas, particularly for families witch children. There is also an artificial creek with special lighting installed in the middle of the square.

German who moved to live in Kaunas: I did not expect so much cultural life here

Jörgen Kipp , Purchasing Manager at HELLA Lithuania, came to Kaunas two years ago to live and...

New plant on way in Klaipeda

SBA Group has launched the second stage of the SBA Technology and Innovation Park development...

With a rapid increase in COVID-19 infections in Lithuania and the world, Utenos trikotažas of the...