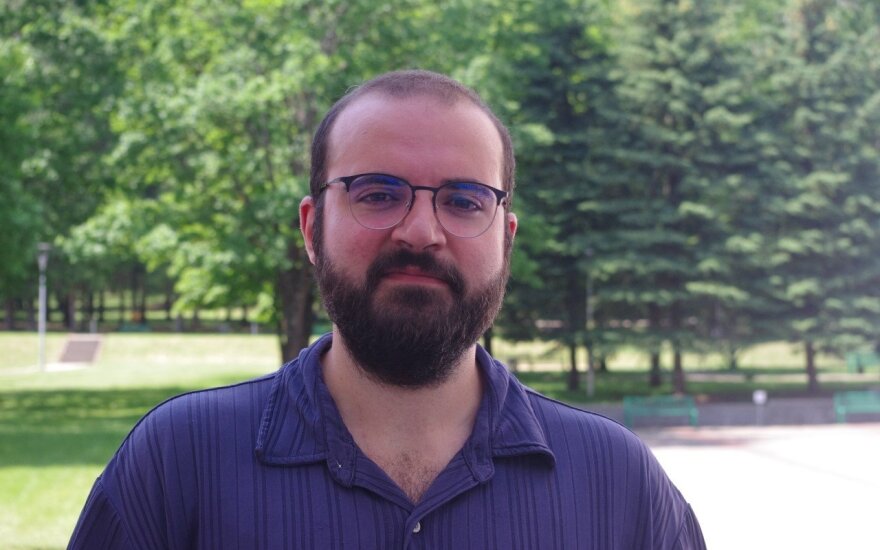 Love of history, and especially history of the Baltic countries, propelled him to come to Lithuania to see for himself. “I read a lot about the Soviet period and then said, “Let’s go and see what we will find.” He discusses life in Vilnius, cultural differences and his love of Lithuania’s famous pink, cold beet soup.

- Why did you come to Vilnius?

- I applied and was accepted for an Erasmus internship at Mykolas Romeris University. It is my 2nd visit to Lithuania as I spent a year as an Erasmus student in Kaunas. Since February I am in Vilnius. I was interested in ex-Soviet bloc countries. My options were either to go to Poland or to Lithuania and I decided to come to Lithuania. Poland is a typical country to go on Erasmus because it is an attractive place to live considering prices and quality of life. Lithuania is also inexpensive, but it is not a common destination for many from Spain thus making it interesting for me.

- You came during the quarantine period, so you were unable to see many of Vilnius sights and discover Lithuania’s capital?

- Yes, I arrived and several weeks later the quarantine period was announced. It was a very hard period. I stayed at home and studied online at my Vilnius apartment.

- What did you know about Lithuania before coming here?

- I read quite a bit about Lithuania before coming. I was interested to see, for myself, how a former Soviet Republic is thriving after breaking away from the Soviet Union.

- What are the differences that you noticed between Spain and Lithuania?

- The way people interact with each other is very different. We are used to saying “hello” or greeting one another on the street, on the job, or in the office. I noticed that Lithuanians talk very little. I also noticed that at the supermarkets, the cashiers sometimes say nothing, but at Lidl they always say,“hello” or greet you.

- You also mentioned weather and noticed that evenings are cooler in Lithuania, unlike Spain.

- Yes, of course, we have much higher temperatures – especially during the summer than here in Lithuania. It is so hot where I come from – Jaen, that at midnight when I go out to my balcony and touch the railing, it is burning hot. During the summer, the heat never subsides, even during the night. Lithuania’s cooler summers, and especially the cool evenings, are very welcome.

- Earlier you discussed differences in driving and adhering to rules of the road. You said it differs from Lithuania in several ways. How?

-Yes, I have noticed that you have a different driving culture in Lithuania. I noticed that Lithuanians are usually driving very fast and we tend to pay much more attention to rules of the road in my country.

- You come from the olive oil capital of Spain. What do you think of the olive oil sold here in supermarkets and stores in Vilnius?

- What do you think of Lithuanian cuisine?

- I like Lithuanian food – pork, the fried bread with garlic and especially the pink soup you eat in the summer. This is my favourite soup and it’s so tasty. I bought Lithuanian famous cookbook author Beata’s recipe book so I could make the pink soup at home. When my friends and relatives came to visit me from Spain, I prepared it and they loved it. I also like cepelinai, but they are heavy and greasy. We are not used to this type of food in Spain. But, I understand that it is so cold here during the winter months that this type of food helps to fill one up.

- What are your plans for the future?

- I have grown to love Lithuania. I hope to get a job and stay here. I am a computer science engineer so I am hoping to find something in my field.

Chinese guide fluent in Lithuanian: difficult language but worth learning (1)

Food engineer Nóra from Hungary: we are what we eat

“Many people ask me if I am a chef when I tell them about my major. In a way I am, but I probably...

Student from Venice in Vilnius: how could Lithuanians live so long under a dictatorial regime and survive? (3)

Russian-born Italian to spend his first Christmas in Vilnius (2)

Romanian artist who chose Lithuania as his home (1) 366

Armenian: Vilnius is like a city in a forest (6)

Astounded by green nature in Vilnius, Armenian student Gevorg Khachatryan said this is one of the...