(1)
DELFI EN
aA
When Digital Marketing student Gustavo Kahn from Panama was looking for a place to study in Europe, Lithuania was not on his list. The 20-year-old, who describes himself as shy and introverted, said he had decided to study in Vilnius after factoring in the costs of studies elsewhere in Europe as well as the quality of studies. 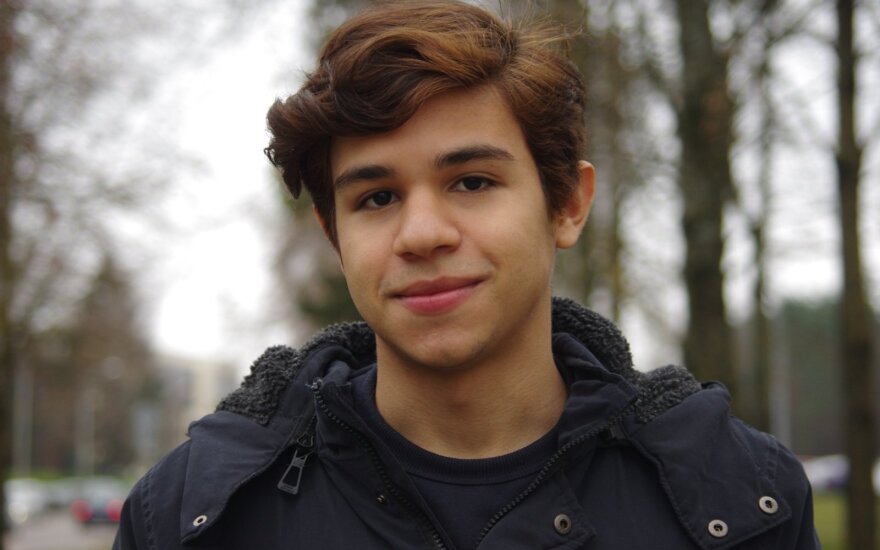 Lithuania came out ahead of Germany and U.K. Now the Panamanian national, who also has U.S. citizenship, has settled in Vilnius.

He finds time to play the guitar with a group of students and says the cold weather doesn’t bother him. He considers himself Panamanian despite his U.S. passport and speaks flawless English.

- Why did you come to Vilnius, Lithuania?

- I finished high school and began Psychology studies in Panama at the Latin University of Panama. I didn’t like it there. It wasn’t for me. I didn’t want to be a psychologist. So I started to search for universities where I could study in Europe. I had this desire to go and study in a European university. I was interested in attending a university in Germany or U.K. I did not want to stay in Panama. I wanted something totally different. I was even thinking about studies in Canada. On the Internet, I came across the Digital Marketing programme at Mykolas Romeris University. It was the right fit.

Related articles
Portuguese living in Vilnius: I don’t understand why in country where population is decreasing building of housing is increasing  (15)
Cybersecurity expert in Vilnius: guard your cables and cords and never borrow from others  (2)

- What did you know about Lithuania before coming here?

- I knew nothing before I came. But, you know, if I know nothing about a country it becomes interesting for me. I had spent about 4 years as a teenager in Atlanta in the U.S., but I was bored there. Lithuania on the other hand, is a whole different story. Besides, I was surprised that a lot of Lithuanians know what Panama is and where it is.

- What differences do you see between Panama and Lithuania?

- Everything is different including the weather, the people, the architecture, nature – everything. I especially like the Vilnius Cathedral with its high ceilings. I just don’t like the Fabijoniškės area. It’s rather grey. Vilnius even smells differently than Panama.

- Smells differently? How does Vilnius smell?

- Here there is the fresh air smell, when you go outside. Every time I walk outside and the wind blows, I feel like I am breathing fresh air. It makes me get in a better mood. It makes my day. In Panama, you have to leave the city (Panama City) and head for the beach to get a clean, fresh air smell. In Panama City there are a lot of cars, so many buildings, no trees and there is some smog.

- What other differences do you notice?

- I think that although people here are quiet and reserved, once you get to know them, they’re not. I noticed on the bus also that people stay quiet and don’t talk too loud. I like the quiet buses in Vilnius because I can sleep. In Panama it’s noisy on the bus. Someone may hop on a bus without paying and play the guitar, sing, collect some money and hop off at the next stop. Also there are beggars on the bus that are trying to sell something. Other salesmen sell everything from soap, newspapers to toothbrushes and other items on a bus.

- What do you think about Lithuanian food?

- It’s ok. In the beginning, during my first week in Lithuania, I was rather shocked because the food looked pretty strange taking into account cepelinai and pink soup. But, when I tasted the pink soup, I liked it and found it to be pretty good. In Panama I ate mostly pizza, hamburgers, pasta – American food. A traditional Panamanian dish is rice with chicken.

- You have managed to make friends with students from various countries?

Yes, I have friends from all over Europe now. I have become friends with students from countries that I didn’t even know existed such as Azerbaijan, Belarus, Kazakhstan and Slovakia. Already I have invitations to visit my friends in Belarus, the Czech Republic, Italy, Spain, Turkey and other countries.
When you complete your Bachelor’s Degree, what do you plan to do next? I want to get my Master’s Degree. Perhaps I will continue my studies in Vilnius. I may stay in Lithuania. I don’t know. It’s still too early to say.

Portuguese living in Vilnius: I don’t understand why in country where population is decreasing building of housing is increasing (15) 323

Environmental researcher Mykolas Romeris University Prof. Paulo Pereira from Portugal is based in...

Cybersecurity expert in Vilnius: guard your cables and cords and never borrow from others (2)

Athletic, outgoing, Father Petras Pich , a Catalan from Spain living in Lithuania, has been an...

Foreign student in Vilnius: I feel much safer here in public transport than in my country (2)

On scholarship and spending a semester at Mykolas Romeris University , 22-year-old Bangladesh...

Researcher's from Ghana first impression in Vilnius: I was surprised by behaviour of bus drivers (3)

First impressions can be lasting. When University of Ghana Senior Research Fellow Samuel A. Ntewusu...

Student from Dubai: people in Dubai dream of having vacation in countries like Lithuania

“I have visited Kaunas before, and I liked it – people here are friendly and kind. I have also...