Expat living in Vilnius: French do not understand Lithuanians in this area

DELFI EN
aA
Historian, lecturer, polyglot Frenchman Arnaud Parent speaks, writes and lectures in Lithuanian. He lives in Vilnius and is busy writing the biography of French physician Jean-Emmanuel Gilibert, who lived in Vilnius 1781-1783 in Lithuanian. 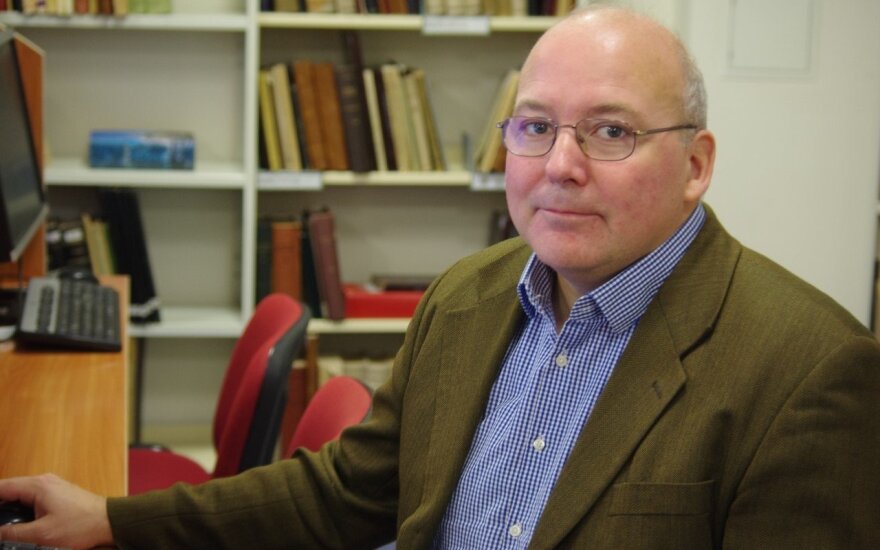 As the new academic year began Sept. 1st, Arnaud Parent noticed that in France there is no such thing as First Day of Classes with celebrations that are common in Lithuania every Sept. 1st. Last year he defended his PhD in history in Lithuanian at Vilnius University and Lithuania‘s History Institute. Admitting that he likes to live among books, he now teaches the French language to students at Mykolas Romeris University.

Arnaud Parent was born and grew up in France and traveled the world studying and working in Ireland, Russia, Belgium as well as Lithuania. Having completed a Master‘s in Law in Belgium‘s Leuven University, he interned at a Law Office in Dublin. He realized that law was not his main passion, so he ended up in Vilnius where he lives with his wife and children.

- Why and when did you come to Vilnius?

- I always liked to travel. When I was 15 years old, I attended Russian language courses in the Russian city then called Leningrad. When I stayed in the Soviet Union, I realized there were a lot of differences compared to France. I was used to living in a different environment. Before coming to live in Lithuania, I was used to living abroad and I always had a thing for Central Europe. I came as a tourist to visit the Baltic countries. After a few years, after I finished my studies, I wanted to live abroad. In 2004 I came to Vilnius and have been living here for 15 years.

- You have a Law degree, but you are teaching the French language?

I love languages. Having worked in the area of law – in an attorney‘s office in Vilnius, I understood that it was not for me. It is interesting to study law due to the logic involved. In 2004 when I first came to Vilnius, I started to work in the Vilnius University‘s Translation Department and I was lecturing on French legal terminology. After that I worked in two language schools and taught French. I taught, of course, in French, but sometimes explained the terms in Lithuanian. It is more fun to present French language lectures than lectures on law. There is much more communication between students and lecturers.

- How many languages do you speak?

Russian, Polish, English, Lithuanian and of course, French. I speak a bit of German. I like to travel. When you know languages, it is easier to communicate with people in that country.

- Have you been working at the University for a long time?

- The first time, when I lectured at Vilnius University, I thoroughly enjoyed it. I liked to lecture and to be with students. I always enjoyed learning and I like to share what I know with others. Universities have a certain openness.

- You recently bought a bike and you like to ride around Vilnius in your free time. Is Vilnius a bike city?

- Yes, I think so, you can say so. There are paths for bikes here. I like to ride around after work or on weekends.

- France is known for its cuisine and world-class restaurants. Do you like Lithuanian food?

- What differences do you see between France and Lithuania?

- I noticed the warm relations between lecturers and students in Lithuania. Everyone is very friendly. Also, the start of a new year – Sept. 1st there are huge celebrations in Lithuania. Nothing of the sort exists in France. Graduation is non-existent. Diplomas are mailed by post in France. It is a procedural thing. There is no graduation celebration like in Lithuania. I personally think it is a beautiful event – graduation. And, I like very much how Lithuanian students and universities celebrate it.

- What else have you noticed?

- I drive a car in Vilnius. I noticed when there is an accident on the road, cars stop and wait until the police arrive. The traffic stops and is blocked. In France, the cars stand for a while and then you have to move them out of the way. Traffic is not blocked in France. Also, one more thing. When a child is born in France, it already has a name. The name is chosen by parents before the birth of a child. In Lithuania, after the child is born, people are asking, „Does your child have a name?“ That is not possible in France and the French do not understand Lithuanians in this area. Each child that is born already has a name in my country.

- How do you feel in Lithuania?

- From the beginning, I have had a very warm reception. I enjoy meeting with Lithuanians and have friends here.

- What are the advantages of life in Vilnius?

- As I said, the city is not big and not very densely populated as Paris is, for example. It‘s also more peaceful here and much more quiet.

Vilnius is a green city and there are many green forests, trees. The air is clean. In France it is different. There is much more pollution in France. But an advantage in Vilnius is the cleaner air. Also, there are lakes nearby. The city is safe. I love riding around Vilnius on my bike.
Do you miss anything living in Vilnius?

Well, Lithuania is quite flat. Vilnius has some hills, but I miss the mountains.

The Lithuanian government approved on Wednesday a proposal that foreigners who reside in Lithuania...

This past summer, after her mother passed away in Oklahoma, Mykolas Romeris University (MRU)...

What languages are studied the most in the EU?

English is, by far, the most popular foreign language to be studied in the EU. Nearly 98% of...

Athletic, outgoing, Father Petras Pich , a Catalan from Spain living in Lithuania, has been an...

Iranian Sina Dehghani is adjusting to life in Lithuania – the weather, traditions and culture. In...

Russian-born Italian to spend his first Christmas in Vilnius (2)

Romanian artist who chose Lithuania as his home (1) 366