British student opens up about life in Vilnius: I expected to see worn-down buildings here 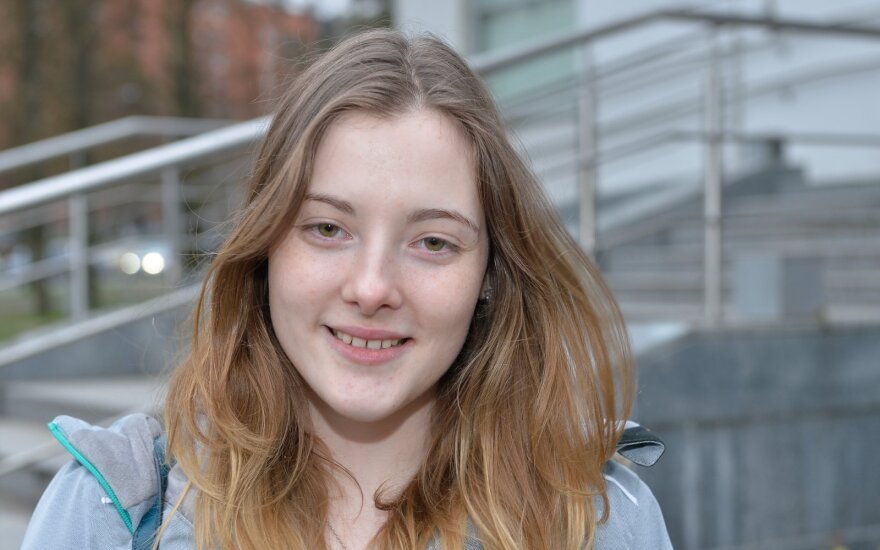 She said she‘s never seen a city with so many trees in one place such as Vilnius and such colourful leaves. Lucky residents to live among such beauty, says the Brit.

- Why did you decide to come to Lithuania?

- As a student in the U.K., I had several options. One was to go and spend a semester in France. The other choice was to go to study at Mykolas Romeris University in Vilnius.

I didn’t want to go to France because I had already been there. Lithuania was my choice because I had never visited and wanted to go and experience the country, to see something totally different.

Related articles
Foreign student in Vilnius: I feel much safer here in public transport than in my country  (2)
Expat from Japan: customers are treated more respectfully in my country  (3)

Also, I know that I will go to France again someday. Maybe I would not have come to Vilnius, if it were not for this Erasmus exchange semester. At the end of the semester, when I leave Vilnius I will spend a semester abroad in Canada at the University of Frazer Valley (UFV).

- What did you know about Lithuania before coming?

- I didn’t know very much. I did know that it was part of the Soviet Union. I knew to expect worn-down buildings. I knew that this part of the European Union is very different from the U.K. I didn’t expect people to be similar to those back home.

However, I didn’t come here knowledge-less, but now I have a lot more knowledge about the country, the people here and Vilnius. In general, we in the U.K. do not know much about your country.

One of my cousins thought it was strange that I chose to come study in Vilnius rather than go to another European capital. A typical British person would rather go where it is hot and somewhat similar to the U.K. I wanted to go somewhere that is different.

- What differences have you noticed during your semester in Vilnius?

- I have good experiences with Lithuanians and not-so-good experiences. It’s a general rule, I’ve noticed, that those on the older side – let’s say those that are 40 years and up, don’t like people from abroad or international individuals. And, they rarely know any English. I thought that if you speak fluent English, people will understand me here in Vilnius, but that’s not the case. It’s not an English-speaking country. The younger generation can speak some English. When I need some help, I seek out those on the younger side. It’s not that I don’t want to talk to those who are older. It’s just that the older generation of Lithuanians doesn’t speak much English. The food and the cost of things also is different. Also, I am surprised by the variety of trees.

- The trees, what do you mean?

- There are so many different types of trees in Vilnius. I’ve never seen so many different trees in one place as here. What is really nice in Vilnius is the Bernardinų park near the Cathedral in Vilnius. It was great to be there in the fall when the colours of the leaves were changing. There was every single shade and colour of leaves from green to yellow to orange even reds. You’ve got all that. We have trees, but the leaves are all of a brown colour. You don’t get the explosion of colour that you get here in Vilnius during the fall. I’ve never seen red and green leaves at the same time. It was amazing.

- Yes. The obsession that Lithuanians have with cream, sour cream in soups, lasagna…in everything. I’ll ask for a meal and it’s not with sauce, but you get your meal with sour cream. I like sour cream, but not on every single food that I eat.

Also, the weather surprised me because when I was here last August, it was very, very hot. I was expecting it to be a lot cooler. It’s the two extremes that you have in Lithuania – it’s either very hot or very cold.

- Also, you mentioned that you noticed that people are more rude in Lithuania?

- I would say so, but it’s not a huge thing. For example, I walk past someone on the street and smile at them, but I don’t get a smile back. If someone opens a door for me and I say ačiū (eng. thank you), people are amazed. I‘m a positive, happy, smiley type of person. I stay positive regardless. I have to remind myself that I‘m not doing this to get something back. Smiling comes naturally for me.

- Do you miss anything?

- Yes, fish and chips. Only at “7 Fridays“ in Vilnius can I get something similiar.

- What will you miss as you head to Canada?

- Mainly people and the friends I have made here. Also, some of the food and I will miss how cheap the chocolate and beer is. Also, there is no buckwheat in the U.K.

I have broadened my horizons and I have a better understanding of what these countries have been through. I wanted to come here to study and therefore I enjoyed my time in Vilnius.

Foreign student in Vilnius: I feel much safer here in public transport than in my country (2)

On scholarship and spending a semester at Mykolas Romeris University , 22-year-old Bangladesh...

Expat from Japan: customers are treated more respectfully in my country (3)

In Japan , it is common to eat a sponge-like Christmas cake during Christmas explains student...

When Digital Marketing student Gustavo Kahn from Panama was looking for a place to study in...

Rimvydas Petrauskas , dean of Vilnius University 's Faculty of History, has been elected its rector...

After the massive success of the “Vilnius – the G-spot of Europe ” campaign, the Lithuanian...

Student from Dubai: people in Dubai dream of having vacation in countries like Lithuania

“I have visited Kaunas before, and I liked it – people here are friendly and kind. I have also...