Užupis adds Hindi and Sanskrit plaques to its Constitution Wall

Ludo Segers and Justinas Šuliokas | The Lithuania Tribune
aA
In a most colourful ceremony with song and dance and some animated speeches, two additional plaques were Thursday unveiled on the famous Constitution Wall of Užupis Republic in Vilnius. The 41-point constitution of the self-proclaimed artists' republic now boasts version in Hindi and Sanskrit. 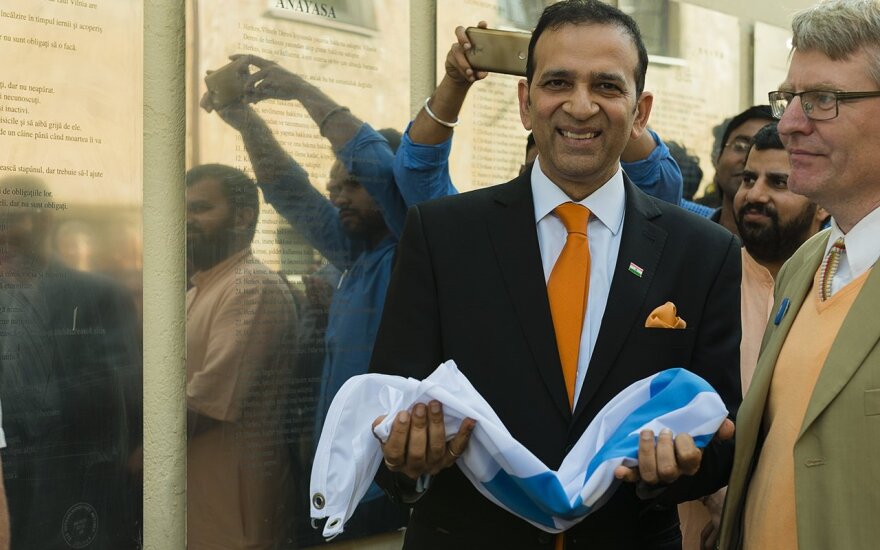 The evening sun was shining on the ceremony attended by India's Minister of State for External Affairs Mobashar Jawed Akbar and the country's Ambassador Ajay Bisaria, as well as a crowd of Užupis residents and visitors.

"I am happy to greet everyone in a 3,000-year-old language that has over 10,000 words in common with Lithuanian," said Ambassador Bisaria, in Sanskrit, before presenting his letters of credence to the prime minister of Užupis Republic.

Several dozen metal plaques with the Constitution of Užupis translated into different languages are mounted on a wall on Paupio Street. It a site popular with tourists and locals alike.

The document has been translated into Hindi by Kristina Luna Dolinina and into Sanskrit by Vytis Vidūnas.

Mr M. J. Akbar, Minister of State for External Affairs, Government of India , and his delegation will...

In the very heart of Užupis , there is a restaurant just as exceptional and alluring as the...

A place to have your last meal on Earth

With so many café and restaurant chains coming to Vilnius, it’s always nice to find a place that is...