Poems of freedom in 23 languages across Vilnius

Ludo Segers | the Lithuania Tribune
aA
During a short ceremony in the joint Embassy of the Netherlands and Denmark, 23 poems of 23 EU member states were unveiled celebrating the re-establishment of diplomatic relations with the newly independent state of Lithuania 25 years ago. 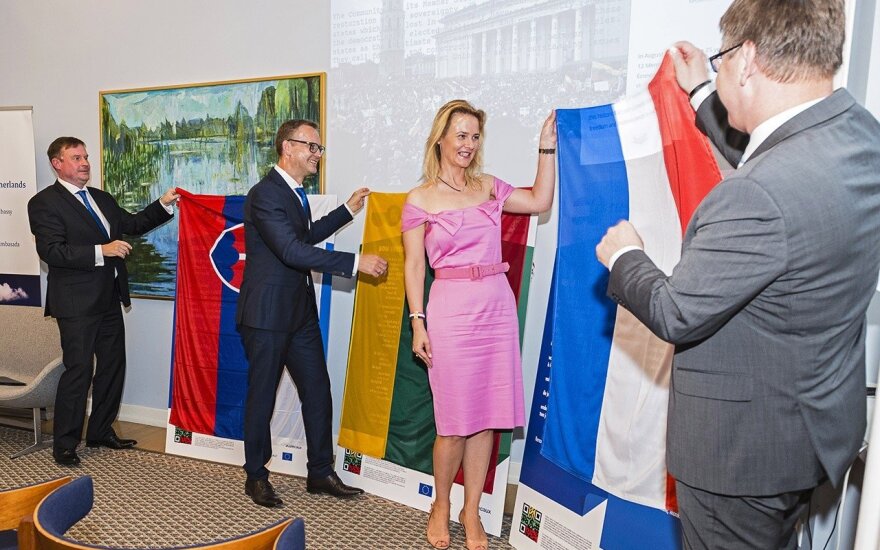 The then 12 members states of the European Economic Community (now EU) decided to re-establish diplomatic relations with the three Baltic States. To commemorate this event, the 23 embassies of the EU member states represented in Lithuania jointly decided to commemorate this historic fact with poetry dedicated to freedom.

Starting on 2 August, the poetic tribute to freedom and independence will be on display on bus stops and billboards all over Vilnius. Each of the 23 countries selected a poem. It will be exhibited in the original language of the respective EU member state alongside a Lithuanian translation.

The Lithuanian Ministry of Foreign Affairs selected a poem by Justinas Marcinkevičius.

Dutch Ambassador Bert van der Lingen said, "The idea for this poetry project and linking it to freedom, was launched among the EU Ambassadors at the beginning of this year, and greeted with enthusiasm."

He added, "Now, more than ever, connecting with citizens is an imperative. The poems are also an indication of the rich diversity of our European culture."

Rolandas Kačinskas, the Political Director at the Foreign Ministry, started out quoting Justinas Marcinkevičius, a prominent and well-loved Lithuanian poet whose words will feature on the Lithuanian contribution. He reminded the audience that "poetry and freedom have always been closely connected".

He said, "We should never take freedom for granted." He also expressed his gratitude to the EU member states "for believing in freedom of Lithuania and assisting it to consolidate its independence".

The advertising space is made available free by the outdoor publicity firm of JCDecaux during a two week period. Žaneta Fomova, the CEO of JCDecaux in Lithuania, was pleased to associate her company with the poetry project.

The poems will be displayed for a week and then rotate to other places in town during the second week, ensuring that all of Vilnius will feel a bit of the message of freedom during a time that freedom of speech is under serious threat in a number of countries.

The EU poetry has two accompanying websites www.together25.lt, in English, and www.kartu25.lt in Lithuanian. The website will display all poems in the original language and in their Lithuanian translation, as well as an interactive map of all the locations of the poems.