Ludo Segers | the Lithuania Tribune
aA
Making a name for oneself in art is a massive undertaking, particularly in the beginning of one's career. Lithuanian composer and painter Mikalojus Konstantinas Čiurlionis (1875-1911) set out at two disciplines at once. 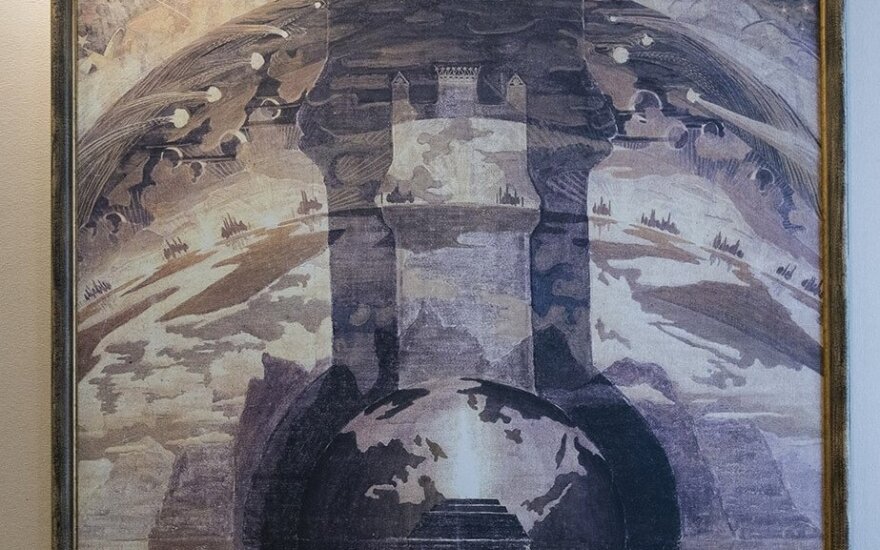 Rex, one of Mikalojus Konstantinas Čiurlionis most famous paintings, a reproduction in Čiurlionis House in Vilnius

Although Čiurlionis was not the first artist to use both visual and sonic approach to art - Wagner had advocated his 'total work of art' in operas, sets and librettos - but the Lithuanian composer, who referred to himself as a 'synthesist' in that he perceived colours and music simultaneously, used musical structures such as sonatas in painting and named works 'sonatas', 'fugues', and 'preludes'.

His paintings, particularly after 1906, were a synthesis of his music, a companion piece and a cross-fertilisation between sound and vision.

Many composers, poets and painters have achieved fame in spite of their short life. Čiurlionis was barely thirty-five years old but when he died, but during his time the prolific artist had composed 400 pieces of music, produced 300 paintings and wrote several literary works. It was also the time when his native country became embroiled in wars and conflicts, and was finally painted in the background for most of the twentieth century. 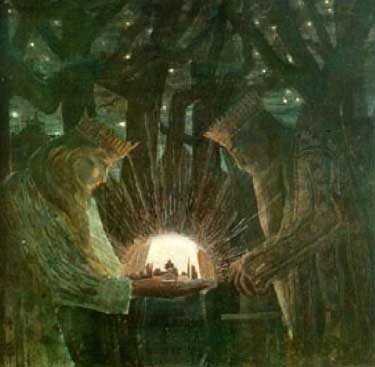 Vytautis Landsbergis, musicologist, pianist and the patriarch of the modern Lithuanian state, is also a scholar of Čiurlionis' work, determined to prevent him from fading from Lithuanian and global art history. Čiurlionis' great-grandson, Rokas Zubovas, became a custodian of his legacy through piano recordings, performances and now as director of the Čiurlionis House in Vilnius.

Čiurlionis has slowly earned a place in history books with exhibitions of his work in major European, American and Japanese museums. His music has also found a place in the repertory of orchestras around the world. In 2005 Čiurlionis' works were featured alongside the works of Kandinsky, Whistler and Paul Klee in "Visual Music" fest, an homage to synaesthesia in the Museum of Contemporary Art in Los Angeles. 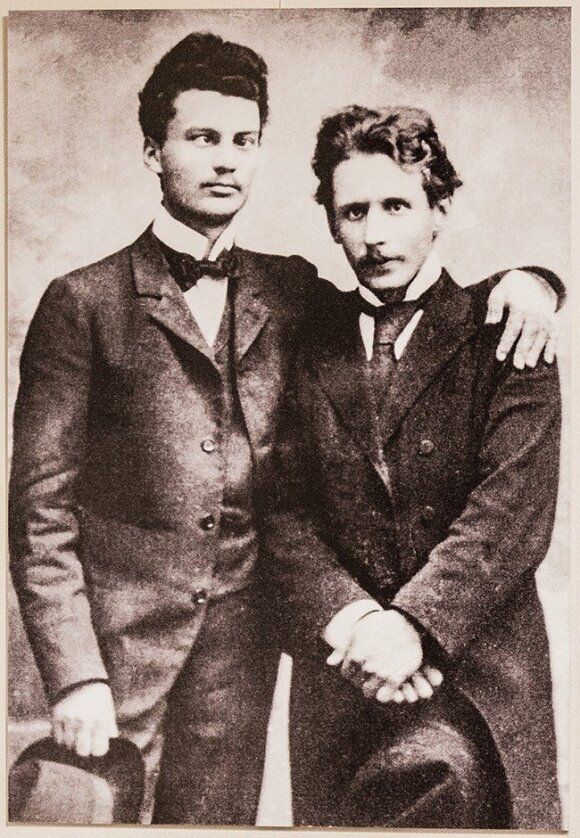 Čiurlionis and his wife Sofija found their way to the silver screen, too. 'Letters to Sofija', a biographical feature film directed by Robert Mullan in 2012, was a success in Lithuania. An asteroid, 2420 Čiurlionis, is named after one of Lithuania's most famous sons.

Mikalojus Konstantinas Čiurlionis was born on September 22, 1875 (September 10, according to the old calendar), in Senoji Varėna, then part of the Russian Empire. Čiurlionis got his middle name from his Lithuanian father, whilst his mother Adelė Radmann was a descendant of a Bavarian family. Mikalojus Konstantinas Čiurlionis was the oldest son of the couple's nine children. When he was three, the family moved to Druskininkai where his father took up the position as a church organist in 1878.

Though quintessentially a Lithuanian artist, Čiurlionis grew up speaking Polish, like countless other Lithuanian families of the time. The language of instruction at school was Russian, as other languages were forbidden in schools under the Russian Tsar's rule. It is in the spa town of Druskininkai that young Čiurlionis started to play piano. The young musical prodigy would be able to sight-read music by the age seven, getting his lessons in piano and organ from his father.

The family doctor recommended that 10-year-old Konstantinas should attend the musical school of Polish Prince Michał Ogiński in Plungė, in Western Lithuania. During his years in Plungė, he received a well-rounded musical education, singing in the choir and learning to play various instruments at the orchestral school. In addition to his musical studies, he started to draw and compose music. From 1892, aged 17, Čiurlionis started playing the flute in the school orchestra, playing concerts in Lithuania and Latvia, earning a salary and contributing financially to his education.

In 1894, 19-year-old Čiurlionis left to study at the Warsaw Institute of Music, financially supported by Prince Oginski. Čiurlionis was now concentrating on piano and, a year after arriving in the Polish capital, he started composition studies with the Polish composer Zygmunt Noskowski. It must have been a demanding and well-rounded curriculum, as young Čiurlionis did not only study harmony, theory and history of music, but also natural sciences, astronomy, philosophy, numismatics and mineralogy. 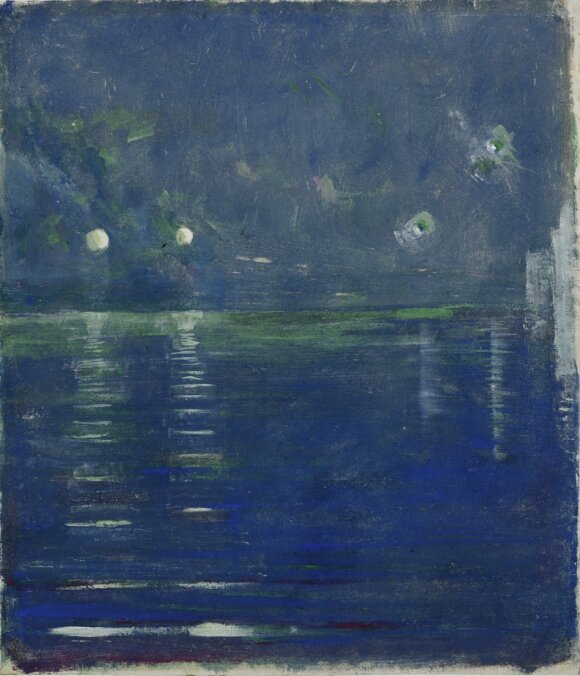 Čiurlionis attended a choir class and read books by the contemporary authors of the day. Adam Mickiewicz, Juliusz Słowacki, Bolesław Prus, Fyodor Dostoyevsky, Friedrich Nietzsche and Leo Tolstoy were among his favourites.

In Warsaw, Čiurlionis composed canons, fugues, preludes, variation cycles for piano and a string quartet. His graduation work, De Profundis, a cantata for mixed choir and symphony orchestra earned him a diploma in composition. Before returning in the autumn of 1899 to Warsaw, he stayed in Druskininkai, spending his time drawing and teaching music to his younger siblings. His brother Povilas joined the same Warsaw Institute of Music whilst Čiurlionis was now giving private lessons, having refused the position of the conductor of the Lublin Music Society’s choir and orchestra.

Čiurlionis' works were still largely influenced by Polish composers in these early days. He composed a Polonaise for wind orchestra. The Nocturne in F-sharp minor in Meloman (No. 8) was his first published composition. It was also during these days in Warsaw that Čiurlionis composed the symphonic poem 'In the Forest'. It is still considered one of his major works, performed regularly, and earned the young composer a special mention from the jury in the Count Zamoyski competition.

In 1902 Čiurlionis studied composition at Leipzig Conservatoire. In addition to studying and composing, he also attended lectures in aesthetics, history and psychology and studied independently the orchestration of Hector Berlioz and Richard Strauss compositions. 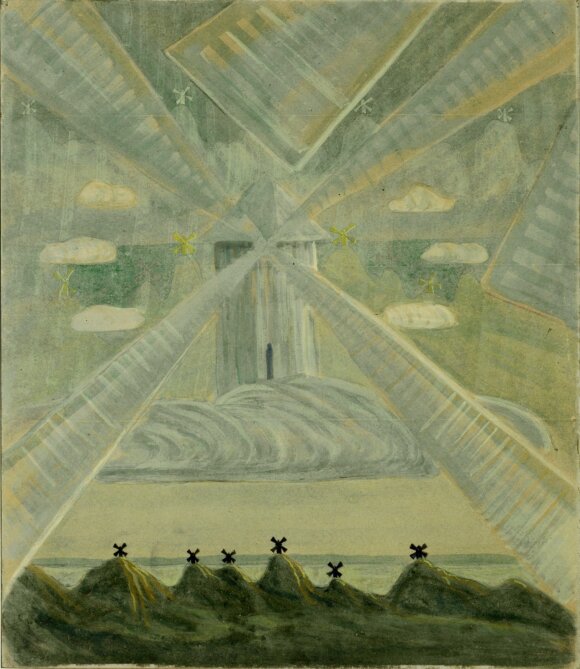 Although the emphasis was on formal German music education, young Čiurlionis attempted to slip Lithuanian folk music elements into his works. That was not always appreciated. The young composer attended concerts at the famous Gewandhaus and Leipzig Theatre. In July 1902, Čiurlionis earned his teacher qualification from the Leipzig Conservatoire.

Upon his return to Warsaw in 1902, Čiurlionis turned his attention to drawing and painting as he enrols in Jan Kauzik’s drawing school. He funded his studies with private music lessons. Several of his younger brothers also enrolled in Warsaw Music Institute. It is during these years that his combination of sound and image takes hold, for which he'd later be called a synthesist.

In the autumn of 1903, he painted Funeral Symphony, a cycle of seven paintings. He began composing the symphonic poem The Sea. In order to dedicate himself fully to art studies, he turned down Emili Młynarski’s proposal to teach at Warsaw Institute of Music. It was time where the movement to promote 'Polishness' had taken hold in the Polish capital. 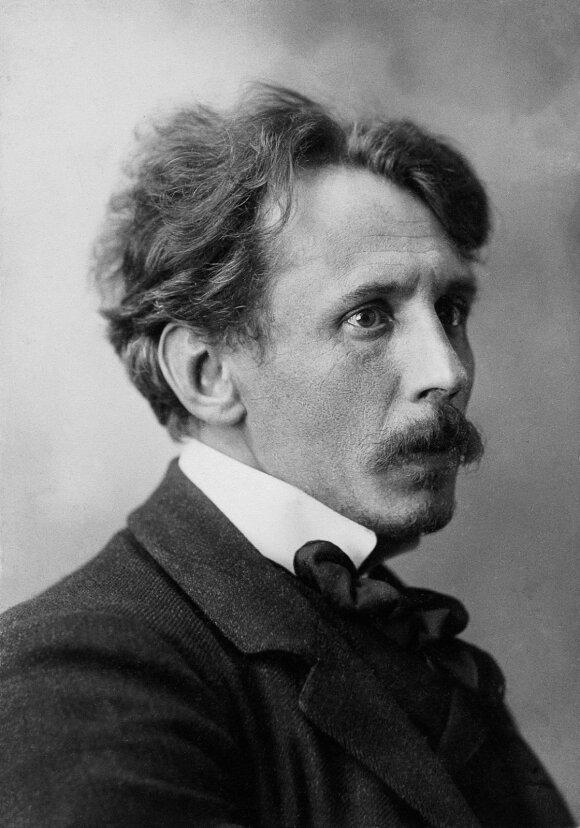 In 1904, Čiurlionis began his studies at Warsaw School of Art. This school was run by Kazimieras, Stabrauskas, and an artist of Lithuanian descent. 1905 was a busy year and Čiurlionis participated in Warsaw School of Art’s exhibition with his stained-glass designs, a cycle of six paintings called Storm, and book cover designs.

During the same period, he also led the school choir. During the summer, he travelled to the Black Sea and into the Caucasus, painting and photographing with a Kodak 3 camera. That camera was the famous little black box and at $40 not available yet to the masses. He returned during the autumn to Warsaw and lived with his brother Stasys, continuing his Art studies. He began leading the choir of Warsaw Lithuanians’ Society for Mutual Assistance. He travelled to an artists’ residence in Ribiniškės, Latvia, and returned to Druskininkai for Christmas with the family.

Following the first Russian Revolution in 1905, cultural restrictions on the Empire's minorities began to loosen and Čiurlionis began to identify himself as a Lithuanian. In early 1906, whilst living in Druskininkai, he arranged some Lithuanian folk songs. In a letter to his brother Povilas, he expressed that he would dedicate all his past and future works to Lithuania. Later, during spring, Čiurlionis took part in an exhibition of works by the students of Warsaw School of Art in St Petersburg, Russia. Art critics took note of his paintings and, in June 1906, a first article about Čiurlionis appeared in Vilniaus žinios.

He spent again the summer in Krynitsa with the Wolman family and wrote his literary Letters to Dievdurakėlis. Bronislawa Wolman provided funds to visit Prague, Germany and Vienna, where Čiurlionis was fascinated by the works of Van Dyck, Rembrandt and Arnold Böcklin. During late 1906, he received an invitation to participate in the First Exhibition of Lithuanian Art, a defining moment in Čiurlionis' life.

Paris museum to tell world about most prominent Lithuanian symbolists

Musee d'Orsay, one of the most famous museums worldwide, should next year present symbolism of the...