EN.DELFI
aA
The Meno Niša gallery opened new exhibition MOnikos on October 4, in dedication to the opening of MO Museum later in the month. MOnikos showcases works by two artists, Monika Furmana and Monika Plentauskaitė, a press release from the gallery states. 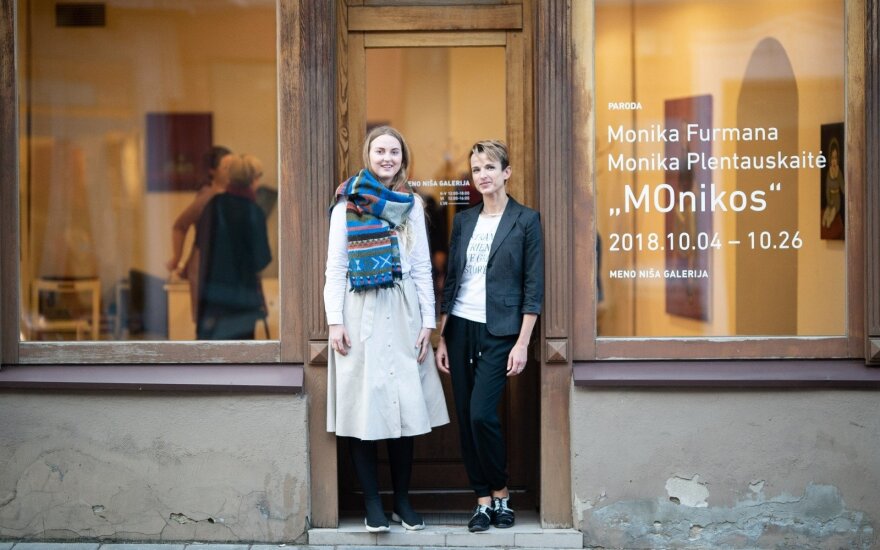 "We look forward to the opening of MO Museum in our vicinity. Therefore, we decided to have a celebration in our space, too. We would like to extend our gratitude for such a significant present for Lithuania to the founders Danguolė and Viktoras Butkai as well as to the entire MO team who are building the museum. This is a cultural event of the century," according to Diana Stomienė, the director of Meno Niša.

At MOnikos, visitors will be able to see works by two interesting and very different artists. Monika is the given name of both painters who have their works in the MO collection. The exhibition at Meno Niša will present works by Furmana and Plentauskaitė that have not been exhibited before.

Sonata Baliuckaitė, the curator of the show, says that one's name is the first sign of identification for a person, while a work of art serves the same purpose for an artist: "Name is something to identify a person by, while a piece of work, its style and technique, identify an artist and are closely linked to a name. A name is part of one's identity. Because you call a creator by their name, too."

In order to create something that is powerful, one must rebel against one's environment and, above all, against oneself, says Furmana. "As a kid, I hated my name, if someone uttered it, I felt uneasy. And so I was growing up with this fundamental sense of unease and a bugging question: what is wrong with me? The meaning of my name, 'single' (from the Greek monos), signified for me being outside the group. However, I usually felt exceptionally comfortable in solitude, I compensated for it with a world of fantasy that opened up for me like the door to Narnia. Later, I substituted 'singular' for 'single'. For me, it signified being original and not following the crowd. Ambitious but, more importantly, responsible. My own friend and rebel," Furmana explains.

The basis for the current show is pure accident, according to the artist. The works on display have been painted over the last couple of years, but didn't fit into any previous exhibitions. By quaint accident, they all explore the theme of motherhood; woman as a hostage of cyclicality; a being capable of giving life, but not escaping her own mortality.

Meanwhile Plentauskaitė is exhibiting her latest works and the show represents a continuation of her previous exhibition Prop Park, "an intimate and sometimes deceptively cosy home". Personal images drawn from the artist's intimate environment, childhood and family photos that acquire theatrical quality in the process of being rendered on canvass, de-personified and used as character-puppets in new scenes.

Opening of MO Museum in Vilnius to last four days, with 346 pieces in initial exhibition

The opening of the MO Museum of modern art in Vilnius will start on Oct. 18 and will last four days,...

Art lovers and professionals should mark June 7-10 on their calendars as ArtVilnius’18, an event...

The MO Modern Art Museum under construction in place of the demolished Lietuva Cinema in Vilnius will...

When art and tech unite, paintings start to talk in Vilnius

On Saturday more than 50 participants met in Vilnius at the first hackathon of arts and tech...

Director of Rooster Gallery: Interest in art is on the rise in Lithuania

The Rooster Gallery , the first mobile gallery that was established in Lithuania ten years ago,...

The MO Museum of modern art, to be opened in Vilnius on Thursday, will provide an opportunity for...