Romas Zabarauskas
aA
In response to a series of seemingly homophobic arson attacks in Vilnius, Lithuania, the Lithuanian LGBT community are importing hundreds of rainbow flags and distributing them for free around the country. Participants in the campaign are defiantly displaying the flags on balconies and in windows, sharing photos with the hashtag #LGBTdraugiškaLietuva (LGBT friendly Lithuania). 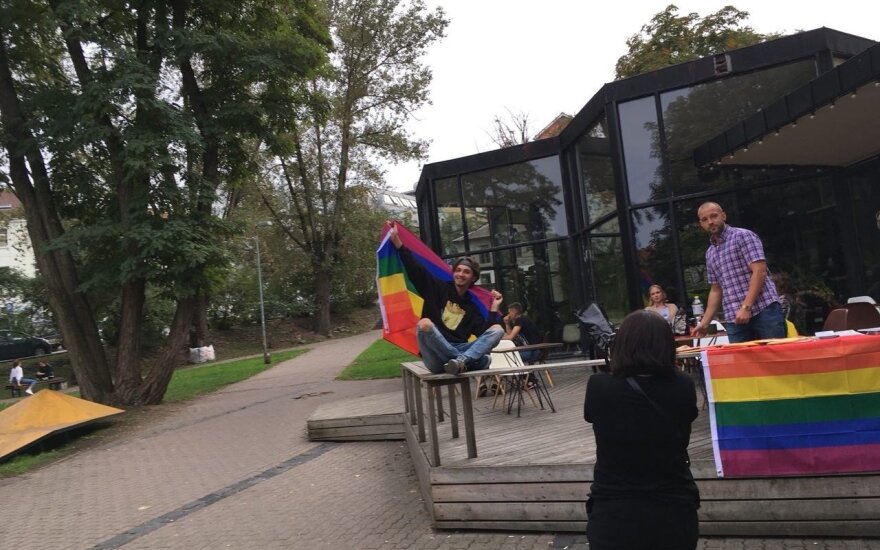 The idea was born after a policewoman investigating an arson attack on the building where Romas lives told him to remove the rainbow flag from his balcony "before the whole building burns down". Romas refused to comply, and instead began encouraging people to display the flag on their own balconies. Within days, Romas and Tomaš raised thousands of euros to buy 500 flags and distributed them for free this weekend. Now rainbow flags are flying everywhere in the capital of Lithuania – a sign of visibility which is unprecedented in the region.

"The growing support for equality and inclusion will not be silenced. Lithuania is a free country and we are showing it with pride," says Romas Zabarauskas.

The story started on August 10, when the arsonists targeted the headquarters of the national LGBT rights organization and the apartment building of its executive director. The police has failed to qualify these incidents as hate crimes. Some people, including openly gay filmmaker Romas Zabarauskas, expressed their solidarity by displaying rainbow flags on their balconies and windows. On September 2, the apartment building of Romas Zabarauskas was targeted and Romas was told by the police to remove the flag. The next day, Romas submitted an official complaint to the police and went public about their handling of the case, resulting in overwhelming support. On September 6, a second apartment in the Romas' building was attacked. After these repeated incidents, the police finally qualified them as potential hate crimes and escalated the case to a higher priority.

The action also sparked a response from public authorities. The Vilnius City Mayor Remigijus Šimašius expressed support and encouraged to "unfurl flags, free citizens of our free city!". Vilnius City Councillor Mark Adam Harold flew the flag from the 20th floor balcony of the Municipality building, saying, "City officials must speak up for all residents, regardless of nationality, religion or orientation. I am just doing my job." The Police Commissioner General Linas Pernavas also spoke out. The cases of now 4 possibly homophobic attacks were transferred to top Vilnius police department for thorough investigation.

"Hate crimes are extremely dangerous, because they infect our community with fear. We refuse to be afraid by raising a rainbow flag. If the attackers wanted us to be less visible, they have achieved completely the opposite effect," explains Tomaš Ilja.

The first shipment of 500 rainbow flags reached Lithuania on Thursday. A successful distribution event was held on Friday, 6 PM at the gay-friendly Paviljonas jazz club – 400 hundred flags were delivered during the first 30 minutes. The remaining 100 flags will be distributed during the queer festival "Kreivės" in Vilnius next week, and delivered to other Lithuanian cities by post.

In a country where same-sex families are still not legally recognized and LGBT+ equality is not yet fully realised, the success of this initiative gives many people hope. Civic society did not surrender to fear and succeeded in sending a message of freedom and defiance.

Friendly City maps challenge the stereotypes in and about Kaunas

Thursday, the new Friendly City Kaunas maps were presented at the Al Cantuccio Italian restaurant in...

On Tuesday, June 12, the Mayor of Vilnius endorsed the growing Friendly City map project and the new...