BNS
aA
Yuli-Yoel Edelstein, the speaker of the Knesset, has honored the family of Ignacy and Katarzyna Bujel, who saved the life of a young Jewish woman during World War Two, at a ceremony in Vilnius, the Israeli embassy to Lithuania said. 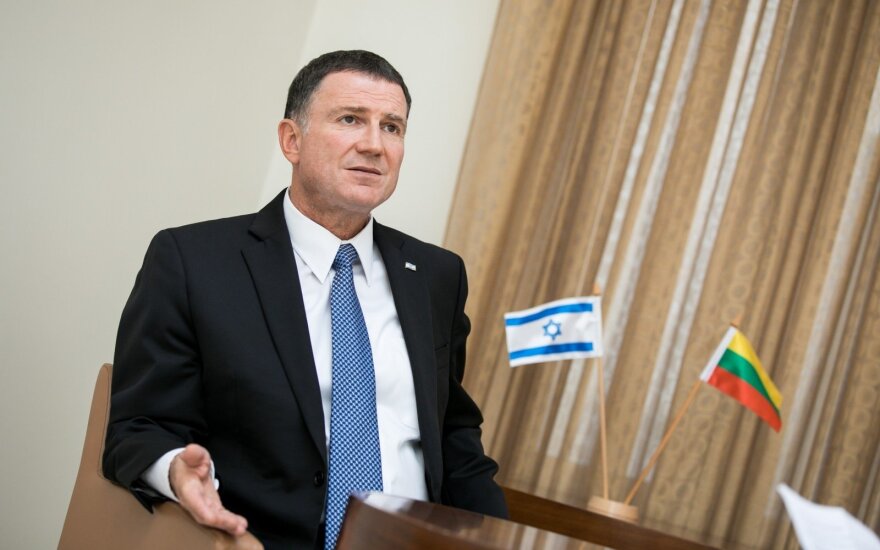 Edelstein and Israel's Ambassador Amir Maimon presented the award to the Bujels' daughters, Kristina Kovalevska and Leokadija Chaninovic, during the ceremony on Wednesday.

The Bujel family was honored as Righteous Among the Nations for saving the life of Feiga Dusiacka, a 24-year-old resident of Vilnius. Feiga, together with her mother and sister and a group of other Vilnius Ghetto prisoners, on Feb. 13, 1941 were taken to Paneriai (Ponar), just outside of Vilnius, for execution.

When the shooting began, Feiga fell into the pit and lay among the dead bodies. The bullets did not hit her, and when the police left, she got out of the hole and ran to the village of Vaidotai and found the Bujels' house, where she used to spend childhood summers together with her brothers and sister. The family hid the Jewish woman when policemen came to their house, apparently searching for Jews.

Among those present in the ceremony at the Lithuanian capital's Sholom Aleichem school were Feiga Dusiacka's daughters, Ana and Kotia Dobiecki, who came to Vilnius from Paris, according to the embassy's press release.

The Jerusalem-based Yad Vashem Holocaust Memorial has recognized around 900 Lithuanians citizens as Righteous Among the Nations for risking their lives to rescue Jews during World War Two.

Yuli-Yoel Edelstein , the speaker of the Knesset , says that Lithuania should pay more attention to...

Yuli-Yoel Edelstein , the speaker of the Knesset , the Israel i parliament, is coming to Lithuania...

Lithuanians are starting to face the Holocaust more openly, which facilitates friendlier relations...

Lithuania to again read names in memory of Holocaust victims

Lithuania will commemorate the Jewish Genocide Memorial Day this year by reading the names of...