BNS
aA
The fire that on Tuesday broke out on a ferry on route from Germany to Lithuania's Klaipėda has been put out and there are no reports about people injured during the incident, Lithuania's Navy says. 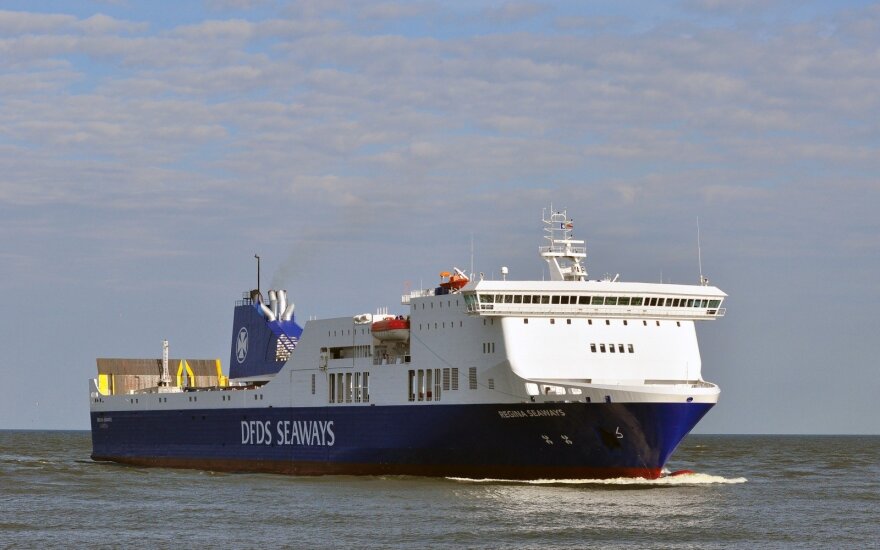 "All people are safe and sound, they are all on the ship, there's no panic, no injured people. A rescue operation is underway," Eugenijus Valikovas, commander of the Lithuanian Navy's Maritime Rescue Coordination Center, told BNS Lithuania.

Lithuanians received a report about the fire in the car area on the DFDS Seaways' ferry Regina at 1.45 p.m. The Ministry of National Defense said in a statement issued at 4 p.m. that the fire had been put out.

A AS-365 Dauphin helicopter of the Lithuanian Air Force flew to the area and made some photos of the ferry, and four navy ships have also been sent to take part in the rescue operation. They are scheduled to each the ferry at around 6 p.m. and will be ready to take passengers, if necessary.

Related articles
335 people on burning ferry in the Baltic Sea
Cause, damage of DFDS Seaways ferry's fire to be clearer on Thursday

The Kaliningrad maritime rescue coordination center is now leading the operation as the ferry is now in its area of responsibility, with the Lithuanian Navy's Maritime Rescue Coordination Center keeping constant contact with the Kaliningrad center.

The incident area is around 110 km from the Lithuanian port of Klaipėda. The ferry left the German port of Kiel for Klaipėda on Oct. 1.

Lithuanian Prime Minister Saulius Skvernelis says he has ordered Minister of National Defense Raimundas Karoblis to involve all necessary forces in the rescue operation of a ferry on fire in the Baltic Sea, and the public must be fully informed.

"The prime minister has been informed about the incident and he's spoken to the minister of national defense. The prime minister said the public must receive all information and the rescue operation must involve all necessary forces from all state services," the prime minister's spokesman Tomas Beržinskas told BNS Lithuania.

The Danish-capital Klaipėda-based ferry company DFDS Seaways is looking into ways to rescue passengers from its ferry after an incident in the Baltic sea on Tuesday.

"We are now dealing with the ship's towing and passenger issues. Towing takes time, and it's not 6 or 8 hours, it might take 24 hours or more. There's no point in keeping passengers on the ferry for so long. But the evacuation issue is not easy either, as we need a suitable ship. Besides, weather conditions are not good," Vaidas Klumbys, spokesman for the company, told BNS Lithuania.

In his words, smoke coming out of the engine compartment was spotted on the Regina Seaways ferry which was on its way from Germany's port of Kiel to Lithuania's Klaipėda on Tuesday.

"There was no fire, only smoke, there was no visible fire and the engines shut down automatically. The engine compartment is sealed, we see no temperatures changes, everything is stable. Passengers are safe, there are no injuries," he said.

DFDS Seaways' ferry to be towed

DFDS Seaways' ferry Regina Seaways will be towed to Lithuania after an incident in the Baltic Sea.

The ferry will be towed by Russian ships to the border of Lithuania's exceptional economic zone and then Lithuanian military ship will continue its towing, the Lithuanian government said.

Firefighters and the authorities of Lithuania's western port of Klaipėda are ready to help the passengers of a DFDS ferry following a Tuesday incident in the Baltic Sea.

Karolis Vaitkeviičius, spokesman for the minister of the interior, told BNS Lithuania the Fire and Rescue Department is ready to accept the passengers in Klaipėda on Wednesday night,

„The department notified the municipality that, if necessary, it will accommodate and feed the passengers in Klaipėda. Due to strong winds, it's still unclear when the ferry will reach the port but firefighters are ready to assist," Vaitkevičius said, adding that efforts are being coordinated with the Klaipėda authorities and other services.

Klaipėda Mayor Vytautas Grubliauskas says he has contacted the Navy command and the management of DFDS Seaways. He did not discount the possibility that passengers from the ferry might be evacuated using helicopters as well.

The mayor said he had information on damage to the lighting, power systems on the ferry and that a reserve diesel generator is being used.

"Naturally, it's complicated for people to stay in such rather complicated conditions for a long time. It's important to ensure that there are no people on the deck and that they can be inside," the mayor told BNS Lithuania.

Services are now assessing risks of different ways of brining passengers onshore since weather forecast are not favorable.

Lithuania's Air Force is getting its helicopters on standby to be ready to assist in the evacuation of passengers from the Regina Seaways ferry in the Baltic Sea following an incident on Tuesday.

The helicopters on standby are being sent to the Nemirseta search and rescue post to be ready to evacuate the ferry passengers, if necessary.

335 people on burning ferry in the Baltic Sea

Lithuania‘s Marine Rescue Coordination Centre of the Naval Force received a message that an...

Cause, damage of DFDS Seaways ferry's fire to be clearer on Thursday