Can a Christmas tree send a social message? It can in Vilnius

...
EN.DELFI
aA
A Christmas tree unveiled in Vilnius this week looks nothing like the shiny decorated trees usually associated with the holiday. Wrapped in a giant plastic bag, the tree at the Independent Christmas Town located at the Vilnius Railway Station serves as a reminder of the hyper-consumerism that tends to take over the holiday season, encouraging a more local and authentic approach to Christmas instead, a press release from Go Vilnius states. 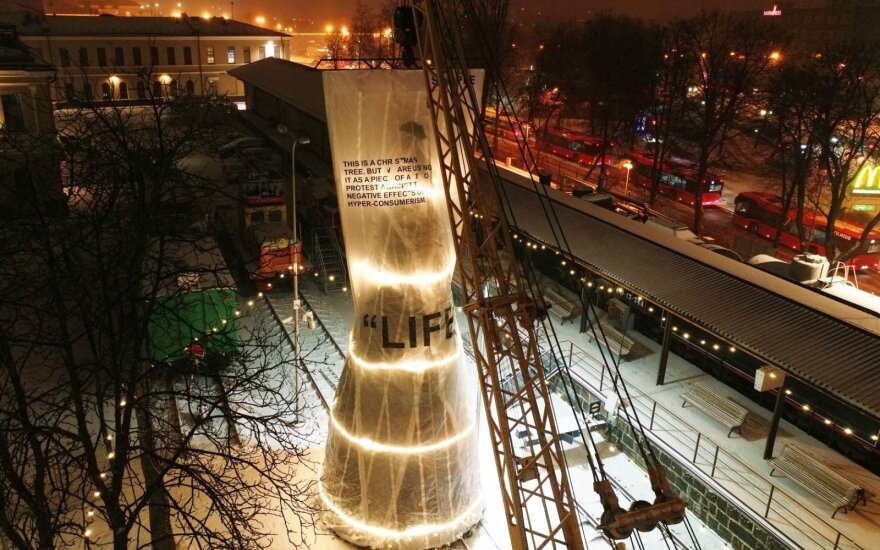 "We wanted to express the idea of excessive consumerism with our Christmas tree, which we have done with a modern art project," said one of its creators, Dominykas Čečkauskas, who is also behind the famous street mural in Vilnius depicting presidents Trump and Putin embracing each other. "We have wrapped the tree in an Off-White-inspired plastic bag and attached clinical breathing masks - we would really like to show the world how we perceive problems with the economy of manufactured demand and hype culture"

Related articles
Our throwaway culture and how to save our children from it
Christmas gift trends: instead of things giving experiences

Along with the tree, over a dozen pop-ups representing Vilnius' flourishing street food and craft beer scene, as well as a slew of performance artists, fashion designers, and industrial techno musicians have taken over the Lithuanian Railway Museum and station area to create a Christmas Town unlike any other.

Local street food pioneers Turgus 2.0, together with Lithuanian Railways, the Municipality of Vilnius, and the city's development agency Go Vilnius, have combined forces to bring this market to life. The initiative, which will run until 2 January, is an experimental Christmas Market aimed at promoting the best of Vilnius' youth culture, and providing an alternative to the malls and traditional-style Christmas Markets that are commonplace across the world. This Independent Christmas Town also serves to support local artists, electronic musicians, and the best of the city's art, street-food, and micro brewing scenes.

"The Independent Christmas Town is an initiative that looks to the future instead of past traditions," continues Čečkauskas. "The festive season has too long been about unreasonable levels of consumerism. This is why we are promoting more conscious Christmas presents by urging visitors to buy unique gifts from local street artists, designers, and second-hand merchants."

Vilnius Mayor Remigijus Šimašius has granted this next-generation Christmas town freedom, saying, "The Independent Christmas Town represents the values of liberty, tolerance, and openness that Vilnius is built upon. Thanks to this initiative, our city's most exciting artists will be able to come together and hopefully show other creatives from across the world that Vilnius is open to their talents and that they are welcome during Christmas or any other time of year."

Traditional market stalls have been traded for the old train cars, including the market's main bar, which is specialising in local festive hot chocolate and chocolate beer. Other cars have been transformed into places to relax with family and friends. Moreover, an original past century dining car has been renovated to its original style, and is housing several pop-up food shacks, including an experimental fondue bar.

During the evenings, the train cars are being used as nightlife venues, playing the best in techno and industrial sounds from Vilnius. These beats also serve as the backing tracks to a series of Christmas-inspired theatre pieces put on by local performance artists of all ages.

Our throwaway culture and how to save our children from it

Christmas is one of the most wasteful times of the year. There is no better way to spend your...

Streets decorated with Christmas lights, sounds of Christmas music in supermarkets or offices...

Lithuanians maintain the tradition of ‘Kūčiukai’

On Saturday, the most interesting Christmas tree in Lithuania was lit up in Rokiškis. The festive...

Anticipation was high leading up to the annual lighting of the Christmas tree at Vilnius’ Cathedral...