www.DELFI.lt
aA
You are surrounded by a blizzard and a never-ending snowscape as far as the eye can see. All you can hear is your own breath, and all you can feel is biting cold. From far away, a team of huskies pulls a sleigh. This is the first scene from a movie called Ashes in the Snow currently being filmed based on Rūta Šepetys' bestseller Between Shades of Gray. 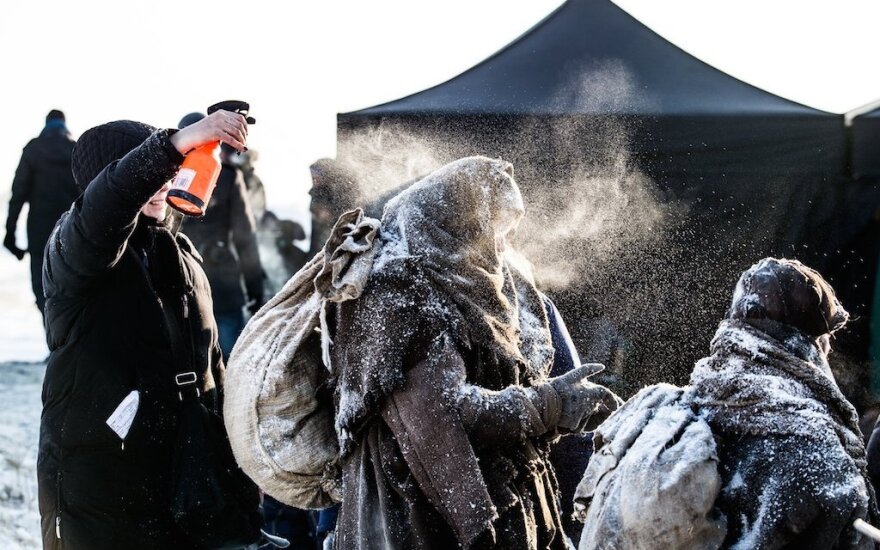 Actors being prepared for scenes in Ashes In The Snow
© Organizatorių nuotr.

An international Lithuanian, UK and US film group has begin filming the movie's first scenes in the dunes of Nida, which are home to scenes from an exile camp in the arctic Laptev region in Russia. In Šepetys' book, this region is home to the book's heroine, Lina, and her family, all of whom were exiled to Siberia.

“After the preparations, which took three years, to be in Nida, my favorite part of Lithuania, and to finally film these first scenes with a wonderful team... It's hard to express this feeling in words. It's one-of-a-kind,” said Marius Markevičius, the film's director.

“This is the first movie of this size after Lithuania regained its independence, which we are creating with an international team and which we plan to show around the world. Rūta Šepetys' book has been published in 50 countries, and the opportunity to bring this story to movie theaters obligates us to do everything to the best of our abilities. We feel a responsibility to our country and to those who had to experience those terrible exiles,” said Žilvinas Naujokas, the film's producer.

The film's operator is Ramūnas Greičius, who was won numerous international awards and is one of Lithuania's most famous operators. He has created more than 20 films, including Tadas Blinda: The Beginning and The Bug Trainer. Daiva Petrulytė has been tapped as the movie's costume artists, and without here, many Lithuanian films would not have been possible. One of Lithuania's most professional film artists, Jurga Gerdvilaitė, is responsible for the film's decorations and for their authenticity.

The lead roles in the film will be played by BAFTA-nominated British actress Bel Powley and Jonah Hauer-King, an alumnus of the prestigious Eton College. They will arrive in Lithuania in the beginning of February. Arctic landscape scenes and massive outdoor scenes with actors are currently being filmed in Nida.

After the scenes in Nida are completed in the beginning of February, the team will move to locations near Vilnius. There, yurts have been assembled to create a village from the Altai region in Russia. After filming the outdoor winter scenes, the team will resume work between May and June.

Lithuania's President Dalia Grybauskaitė attended a presentation of the movie Ashes in the Snow at...