(3)
BNS EN
aA
Some 11 percent of Lithuanian residents support registration of same-sex partnerships, while 7 percent of those polled support the possibility for homosexuals to enter into marriage, shows a poll. 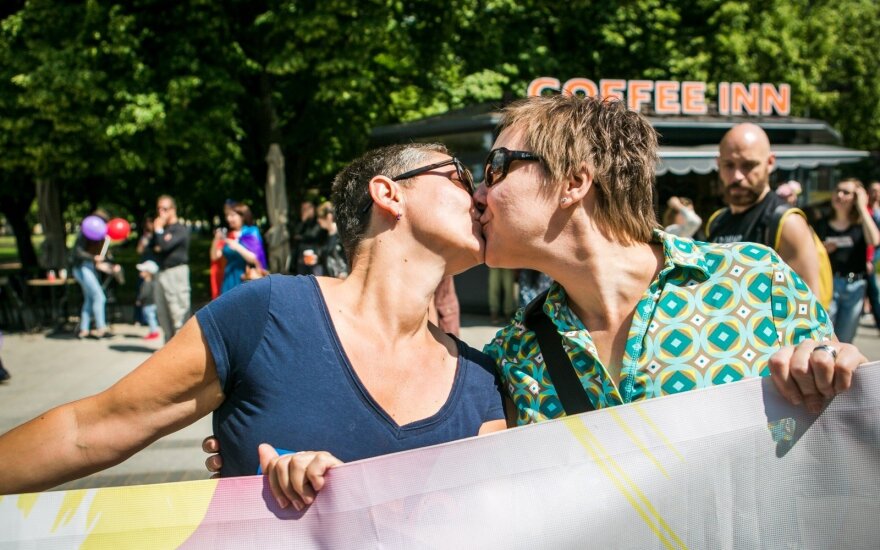 The Chamber of Notaries, which ordered the public opinion survey, said 74 percent of respondents stated a negative opinion about same-sex partnerships, while same-sex marriages are objected by 80 percent of those polled.

According to the press release, the negative opinion on same-sex partnerships has declined from 79 percent to 74 percent since 2013, while that on same-sex marriage dropped from 84 percent to 80 percent.

Meanwhile, support to same-sex partnerships grew from 7 percent to 11 percent over the four years and same-sex marriages increased from 5 to 7 percent.

In the poll, public opinion and market research center Vilmorus interviewed 1,004 respondents across the country on Oct. 13-21 of 2016.

Currently, marriage is the only way of registering relations in Lithuania, with partnership not possible between persons of the same of different sexes.

Partnership as coexistence without registered marriage is envisaged in the 2001 Civil Code, however, the institute does not yet work due to absence of a special law.

Most leaders of Seimas election lists back same-sex partnerships (1)

If ordinary members of Lithuania's next parliament back the ideas of their leaders, the country may...

Conservative leader comes out in support of gay partnership (1)

Winds of tolerance and human rights appear to be blowing in the run up to the Seimas elections . A...

Milda Vainiutė , a law professor at the Mykolas Romeris University who has been proposed for the...

BNS asks Lithuanian leaders if they approve of same-sex partnerships

Amid renewed discussions in the Lithuanian parliament on legalization of same-sex partnerships, BNS...

Around 50,000 people in Lithuania have supported a European initiative to define marriage as a...

Exhibition of Akrolesta ''Retrospective. Selected'' opened in Ukmerge. It presents Akrolesta's works from various collections, created over the past five years. It is the sixth Akrolesta's personal exhibition this year.