BNS
aA
Lithuania's parliamentary Committees on Social Affairs and on Foreign Affairs suggest giving the government a mandate to launch negotiations with Belarus on the takeover of Belorus, a Belarus-owned sanatorium situated in Lithuania's southern town of Druskininkai that is currently sanctioned by the EU. 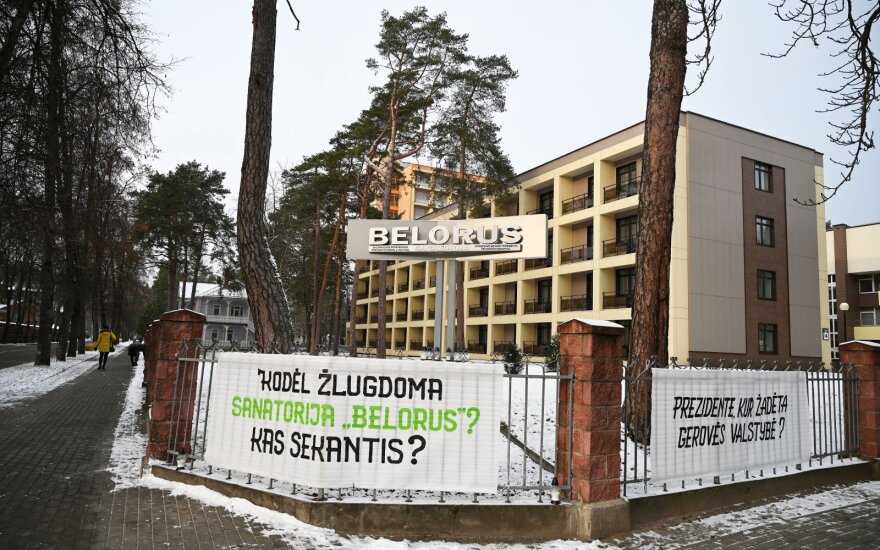 They propose to the government to initiate consultations on a possible buyout of the Belorus buildings that went into possession of Belarus under the Lithuanian-Belarusian intergovernmental agreement of February 6, 1995, and termination of the land lot's lease contract.

Such a joint decision has on Monday been made by the committee.

"Let diplomats try that diplomatic path. (…) We will take better care of our people," Zygimantas Pavilionis, the committee chair, said, adding that the contract has no clause on its termination.

"We cannot unilaterally terminate the contract. We can try terminating it but (…) if the other side disagrees, international court proceedings would start and they would take long and not necessarily end up successfully," he said.

Justas Cobotas, a lawyer representing the sanatorium's workers, agrees that a diplomatic solution is needed to resolve the situation around the Belarusian sanatorium.

Giedrius Surplys of the opposition Lithuanian Farmers and Greens Union, warned, however, that such a decision would "put us on an uncomfortable track" as, on the one hand, Lithuania condemns the Belarusian regime and, on the other hand, it starts negotiation with it over asset takeover.

He also suggested considering what Lithuania would do with a huge building and several hundred workers.

The bilateral agreement signed on February 6, 1995, later ratified by the Lithuanian Seimas effective since April 26, 1996, Lithuania handed over the Soviet-built sanatorium in Druskininkai and leased the land lot for 99 years.

In exchange, Minsk leased territory of 1.3 square kilometers by the Lake Druksiai in Belarus (called Drysvyaty in Belarus and located partly in the northeastern part of Lithuania and partly in Vitebsk Voblast in Belarus.) for the same period of time and hand over to Lithuania pieces of equipment situated there, including the Friendship of Nations hydropower plant and a water lock system called "Object 500". They were important for ensuring the safety of the Ignalina nuclear power plant.

Belarus, however, has so far failed to fully meet the commitments as the hydrotechnical installations have not been handed over to Lithuania yet.

Swedbank freezes accounts of Belarusian sanatorium due to EU sanctions (1)

Swedbank has frozen the accounts of a sanatorium in Lithuania's southern town of Druskininkai ,...

Lithuania's Foreign Affairs Ministry has vowed to launch negotiations with Belarus on the takeover of...