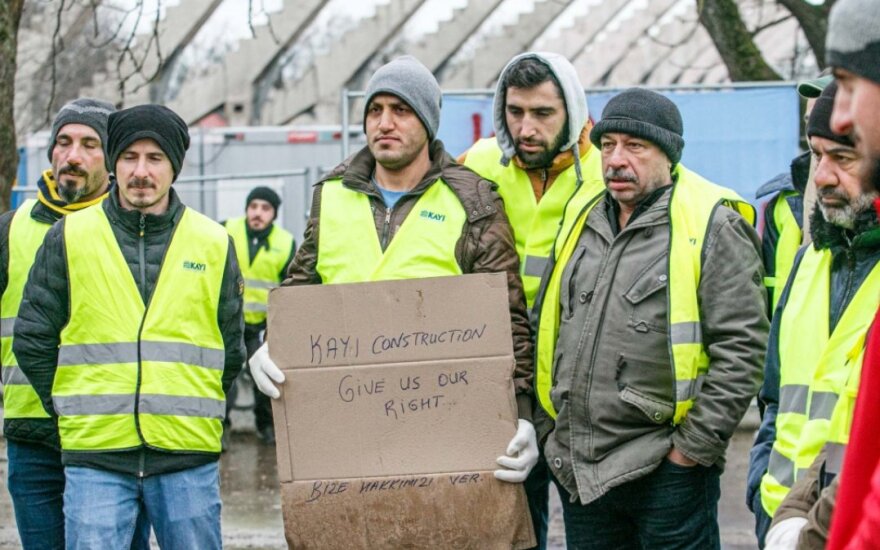 The May 1 Trade Union says 53 workers are currently on hunger strike outside the Kaunas municipality building and intend to continue their protest until they are paid all their arrears.

Turkey's Kayi Construction, the winner of the city's contract to build the Darius and Girenas Stadium, owes each of its workers between 7,000 and 12,000 euros, according to the trade union.

"Before Christmas, the company said it had fully settled with its employees, but none of the strikers received any money," the trade union said in a statement.

"According to them (employees), the company offered to pay only 500 euros each, but the workers demand the full amount owed to them," it added.

Alper Dedeoglu, deputy project manager at Kayi Construction, described it as a temporary problem, saying workers' wages were overdue for only slightly more than a month.

Kaunas Municipality signed the contract with the Turkish construction company for the reconstruction of the Darius and Girenas Stadium in June 2018.

Turkish workers building a stadium in Lithuania's second-biggest city of Kaunas have gone on...

Vilnius Airport will choose who will build new departures terminal

Vilnius Airport , a part of the Lithuanian Airport Network , on Monday announced a public...

Turkish workers set to reach agreement with their employers soon

The ongoing disagreements between the Turkish construction workers reconstructing a stadium in...

The authorities in Kaunas, Lithuania's second largest city, on Friday announced their decision to...