LPK President Dargis: Lithuania is not immune from the winds of change

Ludo Segers and Justinas Šuliokas | The Lithuania Tribune
aA
Lithuania is not immune from the winds of change and the draughts of populism that are blowing across Europe, says Robertas Dargis, a prominent entrepreneur and the president of the Lithuanian Confederation of Industrialists (LPK). With his insightful overview of the country's economic outlook, Mr. Dargis concluded the European Business Network's season of monthly breakfast events. 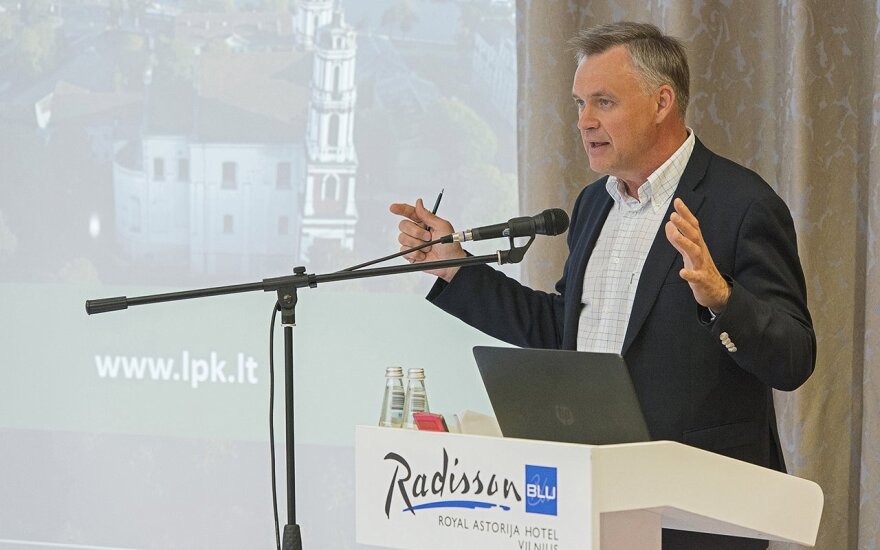 The prominent entrepreneur and real estate developer was the guest speaker at the EBN's event on June 15, sponsored by the Embassy of Romania, the current chair of the EBN. Lithuania's economy and industry in particular, is in a healthy shape and robust enough to withstand potential shocks whenever and from wherever they may come, said the president of the LPK that represents the country's biggest industries accounting for 63% of its GDP. Mr. Robertas Dargis shared his view that Lithuania's industrial exports, the backbone of the economy, are sufficiently diversified and dependence on the Russian market is not as much of an Achilles' heel as it was a decade or even a few years ago. That diversification is much helped by a healthy growth in exports to Asian countries.

The spectre of abundant money

Talks of a new crisis striking the European and the global economy are not without merit, Mr. Dargis admitted, in response to a question from the public at Radisson Blu Royal Astoria Hotel in Vilnius. "We live in a cyclical economy, I have no doubt that a crisis will come, only I don't know when and how deep it will be."

A huge amount of money was injected into the European economy in the wake of the 2008 financial meltdown and the effects of that infusion are deeply felt, not least in inflating prices. "We feel in Lithuania that prices in real estate are growing. Not as much as before 2008, but they are growing again - and I see that happening in all countries in Europe," Mr. Dargis said.

He is confident, however, that the situation is significantly different from the one that exacerbated the effects of the 2008 financial crisis for Lithuania. "After we joined the EU in 2004, Scandinavian banks brought in more than € 20 billion in a very short time, creating bubbles in real estate and wages. So when the bubble burst, the consequences were double for Lithuania" which suffered a double-digit GDP dip. This time around, the central Bank of Lithuania "is looking very closely at what is happening in the markets and in the banking sector. We are not in a bad shape, I think," Mr. Dargis said, adding, "But in general, this issue, the large amount of money, will create problems for Europe."

The rise of populism, another big threat in the continent, seems to have reversed with the election of Emmanuel Macron to the French presidency. Populism was epitomized by the Brexit vote in the United Kingdom and the victory of Donald Trump in the presidential election of the United States.

However, Mr. Dargis believes, Macron merely "postpones for a short time what is happening in Europe. Problems did not go away and he now must show what he can do. If nothing happens within two or three years, there will be more election cycles in Europe. Populism can rise even more, if the French people are disappointed with his reforms."

Macron's pro-Europe position is particularly important. "The Lithuanian business community strongly supports Europe and the single market. 500 million potential clients in Europe are very important for our businesses, not just (the country) Lithuania" according to Mr. Dargis.

Cranes of Vilnius do not bode disaster

Much as in the pre-2008 era, construction cranes dot densely on the Vilnius' skyline. There are signs of the real estate market heating-up. Yet they signify a healthy construction industry responding to demands of the market and are not prophets of a brewing bubble, insisted Mr. Dargis, himself a real estate developer.

"Vilnius, unlike the rest of Lithuania, is a growing city in terms of population. Bear in mind that most of our residential stock was built in the Soviet times, these buildings are very energy inefficient and morally as well as physically antiquated," according to Mr. Dargis. For a city of some 600,000 people to replace its residential stock, it needs between 3,000 and 3,500 new apartments built every year, he said. "Last year, about 3,700 apartments were sold in Vilnius; this year will be more or less the same."

It is new residential buildings that the cranes are twirling over and not mega-sized shopping malls. That Vilnius has enough of, Mr. Dargis believes. Moreover, industrial investment foretells at least 5 to 10 years of stable economic growth for the city, which therefore "needs real estate". "So the real estate market is warming up, but it's not on fire and not a bubble," said Mr. Dargis.

Why businesses would not borrow from banks

Another sign of sustainable growth is the fact that investment into technology and production capacity is picking up. "Technology utilisation is very high and we are on our way to invest even more," Mr. Dargis said. What made 2016 was that bank loans financed capacity expansion.

He quoted a survey from 2015 when the LPK asked its members what sources of financing they preferred to use for business expansion. An overwhelming majority said they relied on the companies' own funds and were reluctant to borrow from banks.

"Lithuanian businesspeople were so sensitive about taking out loans for investing into technology, because they suffered a lot during the last crisis in 2009-2010. There were many bankruptcies, and they remembered how the banks behaved. The banks were selfish, not thinking about cooperation and pulling through the crisis together. I know this very well from my own experience. Even Scandinavian banks were only interested in getting their money back: close the company, get the cash and give it back, nothing more," Mr. Dargis explained.

Only in 2016 was the trend reversed and companies started borrowing more willingly to fund expanding their production capacities, he added.

There are still many problems that the country's government must address, Mr. Dargis believes. One of them is reforming Lithuania's education system.

"And I am not just talking about higher education, at universities and colleges. What I see is a lack of understanding, the market economy in secondary schools. Very few students and teachers can explain what a market economy is and how added value is created in the Economy! This is 27 years after regaining independence and living in market economy. It is (still) a terra incognita for them,'' said Robertas Dargis.

"Where we must invest heavily is in our teachers' education, because many are still products of the Soviet Union, they continue to tell students that business is a bad thing. So the most important thing for the future of this country is to invest into the education of teachers," Mr. Dargis said.

"It is crazy that, at our University of Educational Sciences, not one student over the last seven years enrolled to train as teacher of information technologies, physics, mathematics or chemistry. Who will teach our kids how to live in the world where you cannot go about without technology? In 2020, 90% of jobs will need digital skills."

Demography and lack of trust

Lithuania's most tragic problem is demography, according to Mr. Dargis. "We are still losing 1% of the population each year.'' In one recent discussion between business and government representatives, I said this: ''When the three Baltic countries regained independence, their combined population was 8 million, and Sweden had 8 million inhabitants. Now the Baltic States have 6 million people, while 10 million live in Sweden. Imagine what that means for prosperity and growth. We need to find ways to solve this problem."

"I think that Lithuania only started working seriously on attracting FDI in 2008 when the Kubilius government came to power. He was personally very interested in attracting FDI; he made many trips to EU countries and to the US. It was after that that Barclays and Western Union came, more and more companies built their service centres in Lithuania.

"I remember when Algirdas Brazauskas was prime minister [in 2001-2006] and I personally discussed the issue with him. I sensed that we were competing for investment with all the new member-states of the EU. His answer was, 'Robertas, why are you telling me this? We have enough good guys in Lithuania, they will do everything.' It was only under Kubilius that this attitude changed."

For many years, Lithuania was at the bottom among EU member-states in terms of FDI, but now it is doing well, according to Mr. Dargis. Foreign direct investment brings clear benefits for the country: "First, it brings capital. Second, it brings new technology, because no one invests into old technology. Along comes also new mindset about how companies should be organized. Also, defence comes together with investment."

Nevertheless, economy alone will not solve the problem, he added. "Economy is important, but more important is that a government understands this. There is still a lot of nepotism – politicians only create jobs for their party members.

"But if we create trust, I think many people will come back."

The series of monthly breakfast events organised by the European Business Network returns in September. EBN will celebrate in September its 10th anniversary with prominent speakers addressing how fast changing technology will affect our lives and will shape the future of the business world.

Lithuania needs changes in areas, such as education, however, the important thing for business is that...

PM sees no signs of crisis

Lithuanian Prime Minister Saulius Skvernelis said on Wednesday that he saw no signs of crisis after...

An increase in Lithuania's official emigration rate in the first half of 2017 could be due to living...