DELFI EN
aA
On 16 June, during the General Assembly, European Consortium for Research Infrastructures (ERIC) for Extreme Light Infrastructure (ELI) took place. Lithuania is one of the founder of the so-called "laser CERN", the world's leading consortium of laser research infrastructures. The ELI ERIC consortium was established by Lithuania along with the founders of two international powerful laser centres in the Czech Republic and Hungary, which were later joined by Italy. 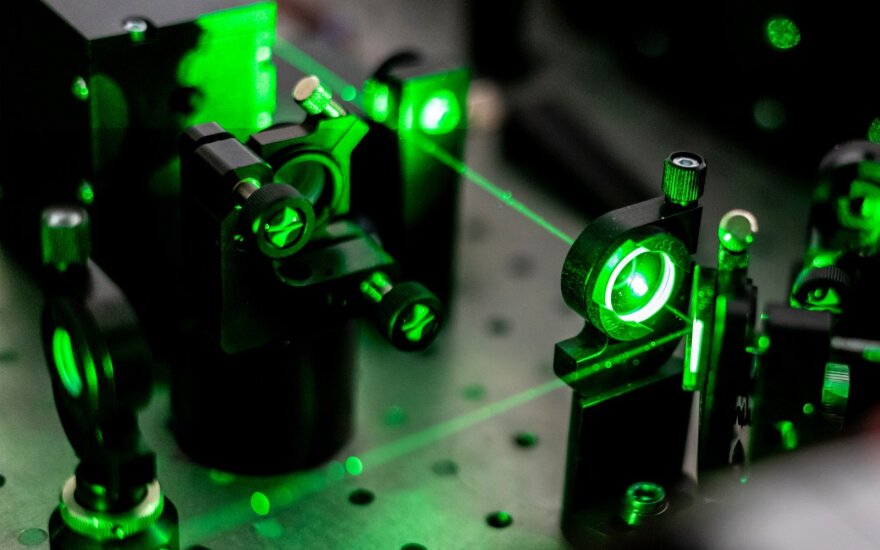 Lithuania will be represented in the ELI ERIC consortium by Vilnius University (VU) and the Centre for Physical Sciences and Technology (FTMC).

The newly established international organisation ELI ERIC will act as the governing body responsible for the scientific, technical, financial and operational success of the international laser centres in the Czech Republic, Hungary (and later Romania). Lithuania, as the founder of the ELI ERIC consortium, will have a voice in resolving important strategic issues of the organisation that are going to affect the map of Europe and the world in the field of laser and photonic technologies.

"Lithuania's accession to the status of the founder of one of the most modern laser infrastructures in the world is another confirmation of the achievements of our country's scientists in the field of lasers, which is something that can be proud of. Scientists involved in the field of lasers are real leaders of Lithuanian science both in terms of international visibility and cooperation between science and business. I have no doubt that when our country becomes the founder of the Extreme Light Infrastructure Consortium, it will open up even more opportunities for our scientists to strengthen their leadership in this field internationally,” says Jurgita Šiugždinienė, Minister of Education, Science and Sports.

According to the Rector of Vilnius University, Professor Rimvydas Petrauskas, the status of the founder of the consortium of the highest level laser Extreme Light Infrastructure confirms that Lithuania is known and recognised in the world as a leading country in laser physics.

“After Lithuania became the founder of the ELI ERIC consortium, the fact was officially confirmed that our country is undoubtedly a part of the global leaders in laser technology, which Europe demonstrates by establishing extreme light infrastructure complexes. Laser systems developed for ELI laboratories use technologies discovered by Nobel Prize winner Professor Gérard Mourou and laser scientists at Vilnius University. This is a great achievement for Lithuanian science and a proof that we can make rapid progress and participate equally in the development of the highest level laser technologies,” says the Rector of VU.

Participation in ELI ERIC will enable Lithuania to join the international research community, promote the development of new laser technologies, their transfer to the market and strengthen innovative research and experimental development activities in the laser sector.

Professor Aidas Matijošius, Head of the VU Laser Research Centre, is convinced that the Extreme Light Infrastructure is relevant not only for scientists involved in the field of lasers, but also for all Lithuanian scientists, as it is intended for multidisciplinary applications of science and technology. "Experiments with the world's most intense and short-pulse lasers in ELI laboratories can lead to discoveries and innovations in nuclear and radioactive waste management, industrial tomography, gamma radiography, production of radioisotopes in pharmacy, development of medical imaging and radiation and proton cancer therapy methods,” Professor Matijošius names the benefits.

According to him, VU researchers are already conducting research commissioned by individual ELI infrastructures to characterize their existing laser systems and components (e.g. measurements of emitted pulse contrast, powerful pulse duration, optical coatings and measurements of the laser-induced damage threshold of other components).

Lasers for ELI laboratories are developed by Lithuanians

ELI's international laser centre facilities use chirped pulse amplification (CPA) technology, discovered by 2018 Nobel Laureate and VU Honorary Doctor Gérard Mourou, which is used to generate extremely short and powerful laser light pulses. This invention of Professor Mourou inspired VU scientists involved in the field of lasers (according to the idea put forward by Professor Algis Petras Piskarskas) to develop improved light pulse amplification technology (parametric amplification of modulated frequency pulses, OPCPA), which is considered to be the most important Lithuanian contribution to global laser physics. On the basis of this technology, ultra-short and extremely powerful light pulse laser systems have been developed or upgraded for decades in many global science centres, and ELI centres are no exception to this. CPA and OPCPA technologies were the basis for the largest Lithuanian laser companies "Light Conversion" and "Ekspla" in the process of development and implementation of high-power laser systems in both ELI Beamlines and ELI ALPS centres. Lasers of exceptional parameters are designed as prototypes of a laser system operating in the VU laser complex "Naglis".

Lithuanian laser companies are now continuing their development processes and in 2022 will install a record-breaking laser SYLOS 3 in an international laser research laboratory in Hungary. The laser will be adapted to generate X-rays and accelerate electrons.

Japan and the United States of America are among those wishing to become partners
The main mission of ELI ERIC is to provide scientists and businesses with access to state-of-the-art lasers, taking advantage of the unique possibilities offered by ultra-intense light. Scientists visiting ELI laboratories in the Czech Republic, Hungary and Romania will be able to carry out multidisciplinary experiments relevant to both fundamental and applied research. The main goal of the ELI Attosecond Light Pulse Source (ELI-ALPS) complex in Hungary is to create a unique infrastructure that enables scientists and businesses to use ultra-short light pulses. Pilot projects requiring ultra-high light intensity (e.g. laser particle acceleration) will be developed at ELI Beamlines in the Czech Republic, and ultra-intense light-excited nuclear experiments will be conducted at the ELI Nuclear Phycics (ELI NP) centre near Bucharest, Romania.

A team of researchers from the Institute of Materials Science at Kaunas University of Technology...

Global Lithuania Award winners refuse to accept them from president (1)

Software engineers have long been the most sought-after and best-remunerated tech specialists out...

Utenos Trikotažas, part of the SBA group, and the Defence Materiel Agency under the Ministry of...

The Lithuanian government is planning to bring back the requirement to wear masks in indoor public...

On Monday, 1 225 new COVID-19 cases were recorded in Lithuania. Since the beginning of the pandemic,...

Eight out of 21 illegal migrants who fled camp found (1)