BNS
aA
Lithuania and another seven EU member states said on Friday they are against the proposal to require haulers to return their heavy vehicles to their country of registration at least every eight weeks. 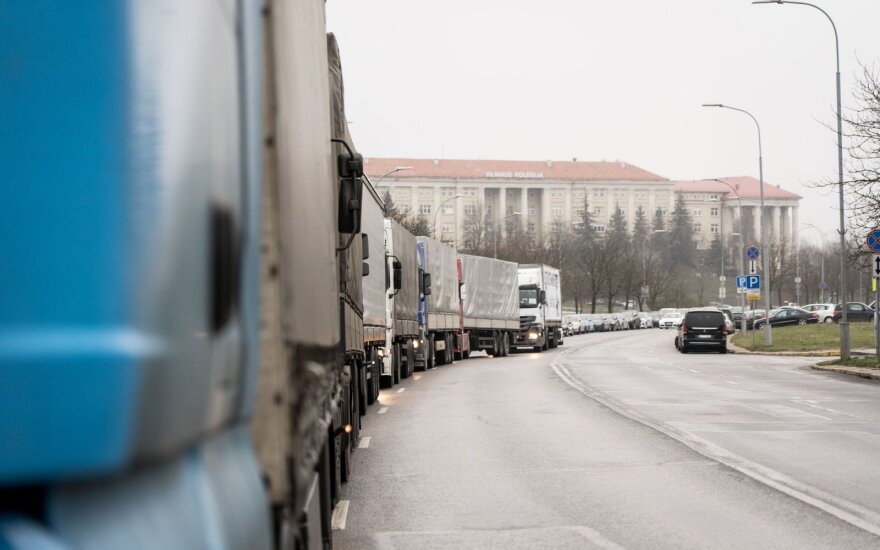 The countries say the mandatory truck return will increase pollution and runs counter to Europe's ambitions to halt climate change. Moreover, the proposal is especially bad for peripheral countries.

A vote on the Mobility Package, which would require haulers to draw up such schedules for truck returns at least every eight weeks, is planned during the meeting, diplomatic sources told BNS.

Diplomats say, however, this group of countries might lack votes to block the decision. Following the Friday vote by EU ambassadors, the bill will then go to the European Parliament for further consideration early next year.

"In particular, the requirement to return heavy vehicles to the member state of establishment at least once every 8 weeks contradicts the EU ambitious climate goals," the Friday statement, a copy of which BNS received, states. "Such an obligation, if adopted, will result in a major increase in the number of empty runs of trucks on the European roads and, subsequently, in a substantial increase of CO2 emissions from the transport sector. This sector already accounts for approximately a quarter of GHG emissions in the EU."

The eight countries say their rational arguments have been dismissed so far and any environmental impact assessment has not been provided yet.

"Another major point of concern is that the mandatory return of the vehicles will put in a disadvantaged position member states which due to their geographical location will have substantial difficulties in providing truck transport services on the single market, as their vehicles will have to cover far greater distances," the statement reads.

Lithuanian businessmen and government representatives say western European countries wants stricter rules to push them out of the market.

Criticizing the Lithuanian government's position, Lithuanian MEP Ausra Maldeikiene says the Mobility Package's restrictions for haulers might be beneficial for the Lithuanian economy in the long-term.

"This sector is very aggressive in Lithuania. It is growing, first of all, on exploitation and imports of an unqualified labor force. The dominance of low-technology sectors in Lithuania is destroying the last possibilities to become a high-technology state with better salaries," Maldeikiene told BNS.

Talks on tighter rules for truck drivers end without deal

Talks between EU bodies on tighter rules for truck drivers , which Lithuanian haulers say could force...

Some haulers exploring ways to settle in Poland

Some of Lithuanian haulers are more and more actively looking at Poland and that is determined by...