BNS
aA
Taiwan's representative office in Vilnius has been opened to develop economic ties with this country but it will not have diplomatic status, Lithuania's Foreign Ministry says. 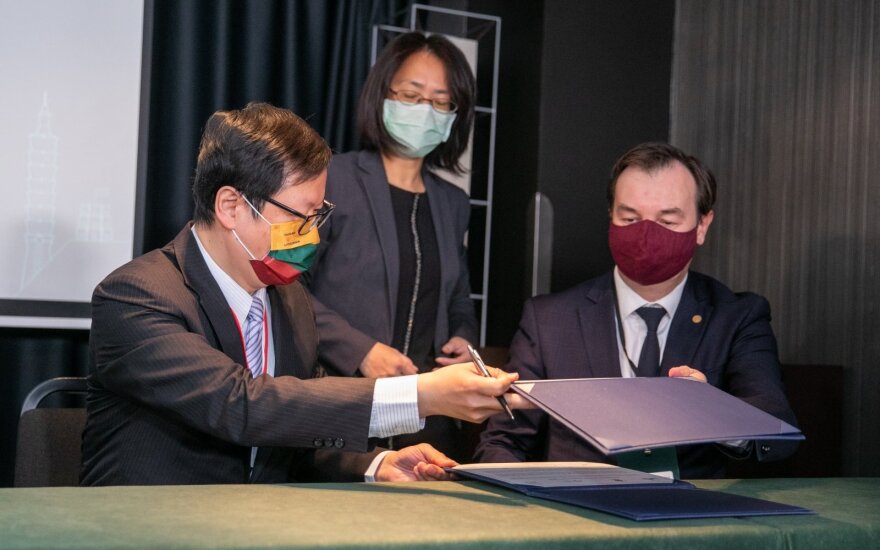 "Our goal is to establish closer relations with the Asian region or the Indian-Pacific Ocean region. Not long ago, we opened our embassy in Australia, and we plan to open our embassy in South Korea probably as early as this year and to open one in Singapore next year, and also probably a representation in Taipei at some point in the future," Lithuanian Foreign Minister Gabrielius Landsbergis told journalists at the parliament on Thursday, commenting on the opening of the Taiwanese office.

According to the minister, China has been informed of the opening of this representative office in Vilnius.

Meanwhile, the minister's spokeswoman Vytaute Smaizyte-Kuliesiene said in a comment sent to BNS "this representative office will not have a diplomatic status".

No reaction has been received from China yet, Landsbergis said, adding that no higher threat level of cyber attacks has been recorded either.

"We believe that economic ties with democratic states are more sustainable and are longer-term, they are more based on the principles of the rule of law, therefore, meet Lithuania's interests more," he said.

Taiwan's Ministry of Foreign Affairs announced earlier in the day that Taiwanese Representative Office in Lithuania officially commences its operation in Vilnius on Thursday. It will be led by Eric Huang, currently Taiwan's chief of Mission in Latvia.

The Taiwanese Representative Office in Lithuania will be in charge of trade ties in Lithuania, including consular affairs.

Lithuania's decision to allow Taipei to open a representative office in Vilnius under its own name has angered China which views the island as a breakaway province.

Elsewhere in the world, Taiwan's representative offices operate under the name of Taipei, in line with an international consensus that this does not run counter to the "one China" policy which prevents Taiwan from being treated as a separate state.

Several months ago, China recalled its ambassador to Vilnius and demanded that Lithuania withdraw its envoy to Beijing.

Diana Mickeviciene, the ambassador to China, returned to Vilnius for consultations in early September.

Two Lithuanian representatives, Andrius Kubilius and Petras Austrevicius, are among members of a...

Huang: Taiwan's Vilnius office to focus on business ties based on economic logic

Eric Huang, head of the Taiwanese Representative Office opened in Lithuania on Thursday, has said he...

Group of MPs call for boycott of Beijing Winter Olympics

A group of Lithuanian MPs from the ruling coalition have called on politicians, the National Olympic...

China has officially downgraded its diplomatic relations with Lithuania to the level of chargé...