Ruslanas Iržikevičius.
aA
The European security architecture needs to change, French President Emmanuel Macron declared during his latest visit to Finland. The changing world security architecture is forcing the European Union to adopt to the changing world. This is inevitable. However, the French President also called for an ‘update’ of the EU and Russia’s relationship. An ‘update’ should be welcomed, but the main question on whose terms this ‘update’ should be. Is the EU ready to accept an extended hand of friendship from the Kremlin? Certainly not and this is why. 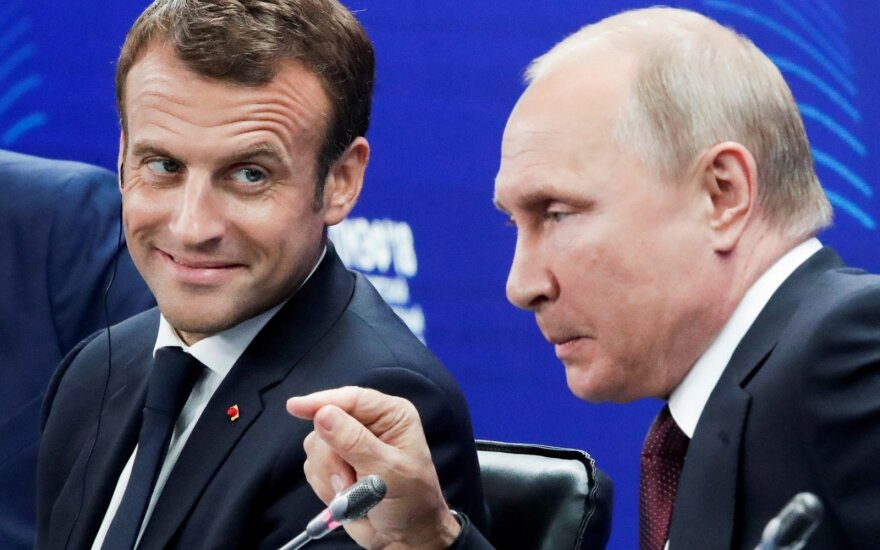 One of the main question is on what terms the EU supposed to speak to the Kremlin: as with a friendly neighbour, as with a partner neighbour or as with a neighbour aggressor? This is a country ruled by an aggressive regime, which glorifies the Soviet empire and uses its military against its neighbours and annexes their territories. Any move to strengthen cooperation with Russia will send very wrong signals to the Kremlin. Democracies went on a similar path in 1938 by giving in to the Nazi Germany the Sudetenland of Czechoslovakia, and we all know how that ended. We do not have to look back 70 years ago, let's look almost exactly ten years back: Russia did not face any consequences for the military aggression against Georgia when the French President Sarkozy negotiated the peace plan. It took six years and Crimea was annexed, furthermore, hundreds of people are dying in Eastern Ukraine until now. Any call for a re-set or a rapprochement is going to be seen in Moscow as a green light for another act of aggression.

Related articles
Arvydas Juozaitis. Emmanuel Macron’s “Napoleonism”
August the 7th and Georgia: anatomy of the betrayal of the decade

The Member States of the EU, who tragically spent a half of a century in the firm embrace of the USSR, have been warning our Western partners about the true Kremlin's intentions. And most of the times those warnings were ignored. If we look back to our history, we will notice a pattern; every closer engagement with Russia ended up with a French or German defeat. Hence, Berlin and Paris should stop calling themselves Russlandverstehers and should listen to the Balts. Mr Macron suggested in Helsinki: "I think that on matters like cybersecurity, defence, strategic relationships, we could envisage the outlines of a new relationship between Russia and the EU which is coherent with the direction Europe is headed in. Stability in the whole region is in our interest." President Macron has received an inaccurate advice again. Stability in the region, this is what Kremlin's regime does not wish to see, and this is what our allies in Paris and Berlin should realise for once.

The Kremlin thrives on instability, especially in the former USSR states. Stability brings a hope of alternative and a more prosperous development. Most of the populations of the former Soviet bloc are looking to the EU with envy, and most of them would like their countries to be there rather than in a grey zone between the EU and Russia. Any country that moved closer to the EU became 'unstable'. Georgia was destabilized in 2008, and Ukraine in 2014. The EU must realize that it is not only NATO expansion toward the East that the Kremlin regime is mostly concerned about, it is the expansion of the EU they are afraid the most. It is not the prospect of membership of NATO that fundamentally transforms the hopeful countries, it is a prospect of the EU membership which does. In fact, the understanding of the Kremlin is that successfully transformed countries are posing a direct threat to the regime.

The regime and the Russian establishment is not capable of reforming the country because the system that supports their riches would collapse. It cannot afford to have successfully reformed countries in its neighbourhood neither because the ordinary Russians might start posing questions to their rulers. At least for the time being, the social contract between the establishment and the Russian population is working; we allow you to plunder our country, for a semi full fridge, pensions paid on time, holidays in Turkey and a new season of 'Russia is great again' broadcasted on a decent TV set for 24 hours a day.

The Kremlin regime perfectly understands that the EU is undergoing a crisis, which potentially could break it apart. It understands that if the EU will survive, it is going to continue attract its neighbours. Hence, it is doing everything in its powers to break it up. The Kremlin acts towards the EU not as a potential ally or a partner, but as adversary who wishes its break up. Russia's actions in Syria greatly contributed to the refugee influx to the EU, and its populist allies from the far right and from the far left are constantly gaining political influence in the Member States. The parliamentary elections in Italy and Sweden, situation in the German town of Chemnitz, is only the beginning. Perhaps accidently, most of those forces admire Putin's Russia and hate the EU and NATO, and also using the information warfare methods perfected by the Kremlin.

All of the Kremlin's actions indicate that is it not a friend of the EU. It is a regime, which wishes the EU's end. President Macron should be thinking of how to strengthen the EU's military with a NATO with significantly diminished USA presence in Europe, rather than making plans of new relationships with an open adversary. If the EU's great powers hope to skip increasing military expenditure in favour of 'befriending' the power, which is a potential military threat to it, we will be experiencing another 'Chamberlain moment' soon. The Kremlin will respect only a strong military alliance which can draw very thick red lines and is able to inforce them intact. It understands only a zero game politics: either you or me. It cannot be 'together', because stability is not in the Kremlin's interest. Haven't we seen enough of 'resets' and 'updates'?

Article published as a part of a project with Estonian Atlantic Treaty Association and funded by the Embassy of Germany in Tallinn.

August the 7th and Georgia: anatomy of the betrayal of the decade

Expert's proposal for a scenario, which would dismantle the Nord Stream 2 project

I. Makaraitytė. What can Saulius, Jūris and Maris give B. Netanyahu?